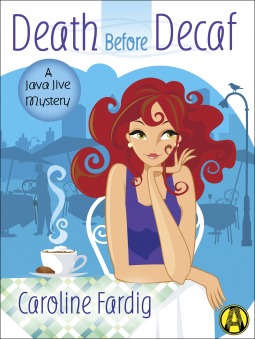 After her attempt at a music career doesn’t pan out, Juliet Langley returns to the coffee and deli shop where she once worked and is very comfortable.  What is not so comfortable is working so closely with Pete Bennett, her best friend from college and the man who now owned the coffee-shop they once both worked at while in college.  …And someone she’s always had ‘feelings’ for.

But her first day back on the job, now in a management position, Juliet has a confrontation with a kitchen worker and later that evening he is found dead by the shop’s garbage bins.  Police Detective Cromwell puts Juliet on his suspects list based on their arguments.

An attractive man by the name of Scott Davis has been coming in to the shop and striking up conversation with Juliet.  Pete doesn’t think too much of this, but is it because Pete doesn’t like Scott, or because Pete has his own feelings toward Juliet?  Pete has a girlfriend, Cecilia, with whom Juliet doesn’t get along.  And as if this wasn’t even turmoil in her life, Juliet is also being hounded by a reporter trying to get a story on Juliet and the murder at the shop.

Because she’s the police’s prime suspect, according to Detective Cromwell, Juliet decides that she needs to solve this crime to clear her name.  But investigating isn’t easy to do when she’s just started a new job and half the employees don’t like her.  And the more she investigates, it becomes clear that Scott Davis maybe isn’t who he claims to be and that maybe her affections toward Pete are more than she claims them to be.

This book is a lightweight mystery – and I use the term in the best of ways possible.

Despite murder and deception, there’s as much attention to relationships as there is to the solving of the crime.  And that’s okay.  It is part of the charm of this book.

Juliet is lovable and the reader bonds with her immediately, which is half the battle with most books (creating a main character that the reader will root for).  But the secondary characters are just as well-defined and have their draws.  Even the mysterious Scott Davis has tremendous charms (in addition to being very good-looking), and the hint of danger surrounding him adds a nice bit of tension.

Although it is the characters that really carry this book, the story and plot are nicely developed, and it takes place in a venue that many of us can identify with.

This is a perfect book for the beach or that morning train commute.

Looking for a good book?  Death Before Decaf, by Caroline Fardig, is like a good cup of coffee – satisfying.