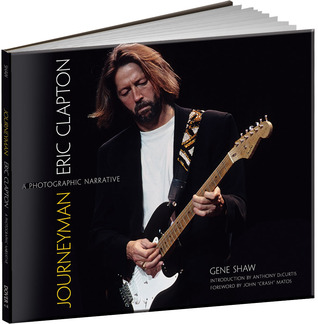 Photographer Gene Shaw is clearly impassioned with Eric Clapton and his music.  As a journalist photographer, he has gotten to travel the world, photographing Clapton and a variety of musicians in concert.  As someone who also enjoys the quality work of Clapton and those he often associates with, I can greatly appreciate Shaw’s interest in his subject.

Sadly, I found this book more than a little disappointing.  But then I’m not entirely sure what the point of this book is.

First I have to look at the title.  What is a ‘narrative’?  Typically you might think of it as a story (that’s what my Merriam Webster declares) but the term ‘narrate’ can mean “to recite the details of (as a story)”.  If you remove the parenthesis and focus on the “recite the details” portion, then yes, this might be considered a narrative.

This book chronicles a number of Eric Clapton’s live concert appearances.  Gene Shaw relates some personal experiences at each concert, which reads more like blog posts (which is okay…I enjoy reading many blogs).  There are a series of photos from the gig (I’m going to guess about an average of five per concert) and then a detail listing of the concert: who played; the instruments each person plays; the titles of all the songs played in the set.  For those who love minutia of this sort, this is quite nice.  I’m personally not quite that fanatical to need to know all the songs played at every concert, but I recognize that there are people who will like this in the same way that there are people who love sport statistics (also not me).  It is more of a concert chronicle, than a narrative.

Second, let’s look at the photographs.  It is, after all, a photographic narrative.  There are a lot of photos and I think nearly every single one of them shows Eric Clapton.  That’s okay…the book is about him.  But for a book by a professional photographer, I am underwhelmed by the quality of the photos.  For every stunning, well framed photo (such as what you see on the cover above), there are three or four pictures that might be considered ‘average’ at best.  Poor cropping, horrible shadows, and a visual mess of cluttered backgrounds AND foregrounds, often make the photographs difficult to look at.  Sadly, I wouldn’t post most of these pictures on a blog page, much less in a book, and I’m quite surprised that a professional photographer would allow some of these pictures to be out there.  (I’ll use page 61 [of my ARC] as an example.  That’s supposed to be David Sanborn, Eric Clapton, Steve Gadd, Joe Sample, and Marcus Miller in the photo but you can’t see ANY one of them clearly.  And a few pages earlier, an in-concert photo with Steve Gadd is dark and slightly blurry.)

One other issue I had with the photos is the lack of photo identification.  Perhaps this is simply a matter of the ARC, or the digital edition, but not a single photograph was labelled or identified on the photo page.  When I got to the end of the book there was an interactive listing of photo identifications.  I could see something like “James Cotton and Eric Clapton, New York, 2012” and then click on it to be taken to the photo.  It’s sort of a nice feature, but too often I wanted to know WHO was in a photo.  Not knowing, and not using page numbers in the end interactive part, made it all but impossible for me to identify the photos I was most curious about.

The over-all feeling is that this book is a personal journey, a personal homage to Clapton, and not a professional “photographic narrative.”  I am truly disappointed.

Looking for a good book?  Only the most ardent fans of Eric Clapton…those who will clamor for anything featuring their musical hero, will appreciate Journeyman: Eric Clapton — A Photographic Narrative.