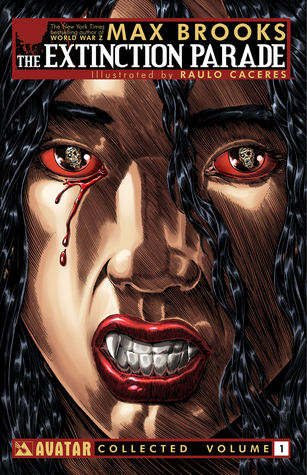 Max Brooks, perhaps best known for his novel World War Z, is playing with zombies again, this time pairing them with another form of fiend — the vampire.

A pair of female, Asian vampires, who’ve been around for a long time, delight in the uprising of the zombies.  Watching them slaughter humans who have no chance of escape.  And because the vampires aren’t living, breathing, blood-flowing people, the zombies completely ignore them.  It’s a great time to be a vampire, right?  Except, just as this book (this collection of the first few issues of the comic book), comes to a conclusion, the vampires begin to realize that the zombies are eating THEIR FOOD!  Maybe the zombie apocalypse isn’t such a great thing for vampires after all!

It’s a clever enough idea, though certainly not wholly original.  But because the story is being told from the viewpoint of the vampires, it would help if we could connect with them in some way.  But we can’t, and that, ultimately, is the downfall of this book.  Humans are being eradicated by the zombie plague.  Vampires have taken this as an opportunity to not hide in the shadows but to hunt and feed openly.  And the reader is connected to this story how?

The vampires have a servant…someone who cleans up after them…takes care of their feeding left-overs and removes evidence of their existence.  Though the current servant has been with them for a long time, and they’ve had a number of servants before him, they don’t even know his name.  These vampires who are telling the story are full of hubris and act like spoiled children, getting everything they want and treating everyone and everything around them like dirt.  The servant’s sudden decision to leave at least adds some mystery to the story and I hope we’ll learn more as the series continues.

The art reminds me of the hand-colored wood-block prints I’ve seen in galleries.  Thick, black inks and solid, bold colors.  At times this worked very well and at other times it appeared rushed.  This led to very uneven art look.

I am a little curious to see where this goes and to see if a story actually develops.  The servant’s story strikes me as the most interesting now as we’ve otherwise spent 160 pages of doing the same thing over and over…zombies kill humans, vampires watch and enjoy, vampires kill humans … repeat.  I’ll be interested enough to pick up the next issue if I can, though if I missed it, I don’t feel as though I would have missed out on too much.

Looking for a good book? If you want to see both zombies and vampires in the same graphic novel, this might be the book for you, but if you want strong, interesting characters and a compelling story, then the graphic novel The Extinction Parade is not what you’re looking for.