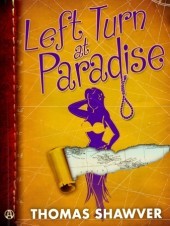 I’ve slowly been coming to read more and more mysteries, which I typically enjoy, and this one, “A Rare Book Mystery,” was especially appealing since I clearly have a passion for books.  And as someone who, as a teenager used to spend HOURS in antique shops and used book stores searching for the little valuable gems, I felt I could definitely identify with a mystery involving a bookseller.

In this story, used bookstore owner Michael Bevan discovers a journal written by a crewman on one of Captain James Cook’s voyages.  Sensing he’s finally found a treasure worthy of an antique book collector, he seeks out a pair of collectors from London who claim to have a second journal from the same scribe on another Captain Cook voyage.  They suspect that there might be a third journal and Bevan thinks he might be able to make a small fortune (or enough to keep his store afloat for a year) if he can convince one of the other journal owners to purchase his in order to have the more valuable set of three.  But when the first two journals are stolen, Bevan and the other journal’s owners follow the trail of the journal (and Captain Cook) to some Pacific paradises where their very lives may be in danger.

Author Thomas Shawver creates a clever plot that sends our heroes globetrotting despite being simple antique book dealers.  The story of collecting rare books led to a larger, slightly more modern mystery which took a little of the edge off of the story for me.  I wanted to stay in the book world a little more than I did.

Shawver has a wonderful way with phrases:

I guessed she was thirty … and in full ripeness of sultry, knowing womanhood.

Her grip was firm and businesslike, without invitation to know her better.

She was as common as an NBA tattoo…

And how can you not appreciate a character, whose name is Penelope but who goes by the nickname “Pillow.”  “Pillow” Wilkes is a brilliant name which immediately draws up all sorts of images to this reader’s mind and you know it’s only a matter of time before our hero and “Pillow” will get between the sheets.

One small moment of confusion for me… while discussing the journal, written by a man named Gibson on Captain Cook’s voyages, one of the book dealers says of Gibson, “Cook’s leniency paid off.  No other marine served on all three voyages.”  But just a few pages later they are looking at an affidavit of Robert Anderson, Royal Navy, dated 1780.  Bevan asks:

“A friend and shipmate of Gibson’s on all three voyages,” Hart said…

So clearly Gibson wasn’t the only marine to serve on all three of Captain Cook’s voyages, and yet this is never discussed or brought to the fore.  A simple writing oversight?

While the plot was engaging and Shawver turns some wonderful phrases, I had a great deal of trouble connecting with our hero, Michael Bevan.  I never really cared whether he succeeded or failed in his quest.  And even when he scored the find of the journal itself, it never struck me as a truly important discovery.  If we’re going to read a mystery, rooted in antique books, you would think that we are either going to truly support the ‘detective’ of the story, or be enthralled by the draw and pull of the rare book  (or in an ideal case, both).  Sadly, we get neither here.  Bevan is a bit bland and boring (the most exciting thing about him is Pillow), and the book is secondary to the very modern trappings of international skullduggery.  This isn’t quite where I was expecting the book to go, and while detours can be delightfully fun if done well, this one had me struggling to finish.

Looking for a good book?  There’s potential in this mystery series but this particular entry, Left Turn at Paradise, leaves me less than enthused.