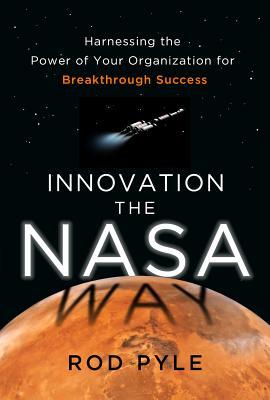 First, this is a very nice summary of NASA’s history, hitting the highlights (Gemini, Apollo, Voyager, Skylab, ISS, Space Shuttle, etc) — the successes — and touching briefly on the catastrophic failures.  You could certainly write volumes on any one of the NASA projects, but Pyle manages to capture the essence and the innovation of NASA’s existence.

Second, the book does precisely what it sets out to do — point out the innovation of one of the most necessarily creative organizations in existence.  Often born out of necessity, NASA’s innovation comes from the fact that time and again, they set out to do things that not only had never been done before, but had to prepare for things that they couldn’t possibly know might be problems.  As Pyle points out, this is precisely why he chose to use NASA to illustrate innovation.

Pyle very nicely poses questions or challenges throughout each chapter, and follows these up with ‘solutions’ using NASA’s history to illustrate his points.

We’ve probably all heard the over-used phrase “think outside the box” but NASA is the perfect example of this, and in many ways this book is a salute to that tired phrase.  Innovation = thinking outside the box.

Something that I found very interesting, though it was not necessarily an intentional point to the book.  Money, and the lack of it, can change the course of innovation.

At the beginning of NASA’s existence and popularity, money was rather plentiful.  Pyle notes that NASA’s budget was almost 5% of the national budget (as opposed to the .5% today).  At this time, when NASA had a Presidential directive to be the first to the moon, innovation came from a great deal of dreaming and planning and trial and error.  When something failed, it was examined, corrected, and attempted again.  There was money for this and in many ways it led to a very productive and positive beginning of the space program (with the exception of the horrific results of Apollo 1).  At this time, innovation was a result more of preparing for the unknown (would the module actually be able to leave the moon and meet up with the orbiting ship?) and the known (thrusters would only be able to get a limited amount of weight out of Earth’s gravity).  As the U.S. government lost interest in the space program, innovation was often a result of monetary constraints.  NASA might still want to push the boundaries and attempt the unknown, but now they are asked to do more with less.   Both reasons for innovation, however, often lead to unusual (some might say unorthodox) solutions.

Having worked in the not-for-profit sector for decades, I can greatly appreciate the need for innovation, and can empathize with the need to be creative or innovative and to do more with less.  However, Pyle makes one statement that does not sit well with me.  At one point, Pyle’s “challenge” is: “Preserving a mission that has gone well beyond all expectations of achievements … and budgets.”  His solution is: “Trim required personnel, equipment, and “mission footprint” to a bare minimum, and use only the time and personnel that are absolutely necessary to accomplish the task at hand.”

While NASA may have had their ‘fat’ days and the luxury of indulging a large number of people to work on projects, this is very rarely the case in the private sector.  I can speak from experience in the non-profit world, that there is already not enough money to hire the people who are necessary.  Every year of preparing budgets I have heard the same mantra “trim the fat” and yet there isn’t any fat.  What happens is that more and more people are reduced and upper management points and says “See…you didn’t need those people” not realizing that it has made a dedicated few over-worked for no additional compensation.  Who decides what is “absolutely necessary” and what is the criteria?   Innovation due to lack of funds is understandable.  Innovation as a substitution for funding may show a lack of responsibility and can be dangerous.

I am definitely impressed with Rod Pyle’s ability to give us a history of NASA and to point out how innovative the organization has been, challenging companies to think like NASA and come up with new solutions to their challenges.  In many ways, I think the book can be summed up in Pyle’s own words … a quote which should have been highlighted, and will become a meme on my Facebook page (emphasis mine):

Despite the challenge of low budgets and risk aversion, thoughtful innovation does ascend through the system. There is always time later to rein in ideas to fit budget and schedule parameters. But if you don’t go large at the beginning, you will never achieve greatness.

Looking for a good book?  Anyone looking to get the most out of their workers or company needs to read Innovation the NASA Way by Rod Pyle, and anyone with even a passing interest in NASA and space exploration will want to read this excellent book.

Innovation the NASA Way: Harnessing the Power of Your Organization for Breakthrough Success

One comment on “INNOVATION THE NASA WAY – Rod Pyle”