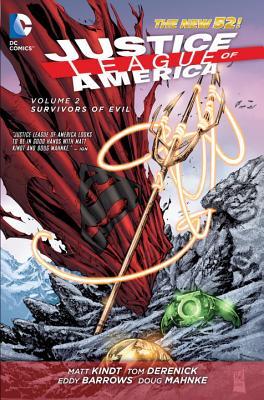 This book was just dull.

In the graphic novel milieu, I’ve lately read a number of titles that have been quite extraordinary.  None of them have been of the major-publisher-superhero-ilk such as this and I think the difference in story-telling is night and day (with this being the lesser ‘night’).

I did not read Volume 1, so I was already a little behind in the story … what, precisely put the League members in their current state?  Some of that comes through in the story-telling, but I get the sense that Volume 1 was the action, and Volume 2 now is the lull, getting ready for the next big action sequence.  It is nice that we get a glimpse at the inner psyche of our heroes … what drives them?  What fears do they have?  But despite unique abilities, our heroes are pretty much cut from the same cloth and thus it becomes a bit repetitive moving from one hero to the next and to the next.

And because there’s a big psychological aspect to this story, we, the reader, are never entirely sure where we are.  This type of story-telling can be incredibly compelling, but it can also be incredibly confusing, depending on how it’s handled.  In this case I’m afraid it is the latter.

The art is fine, pretty standard slick comic book art with lots of detail that creates a busy series of panels.  The art does not help clarify the story’s intent, but it doesn’t harm it either.

Looking for a good book?  You have to be a pretty dedicated Justice League fan to really appreciate the rather dull and random story line.