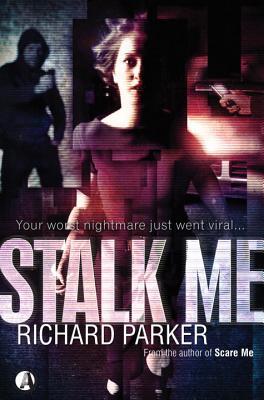 **WARNING: POTENTIAL SPOILERS IN THIS REVIEW**

If what makes a great thriller the sense that someone is always watching you, that every choice you make, every thing that you will do, will be shut down by someone and there’s nothing you can do about it — then this is a great thriller.

Stalk Me starts with a car accident.  Beth Jordan has survived, just barely, and when she sees legs coming toward her, she thinks she is on her way to being rescued.  Instead, feet stamp her already battered body into unconsciousness.  Somehow, Beth manages to survive, which only begins a reign of terror for her.

In our modern age of cell phone videos and immediate uplink to sites like Facebook and YouTube, the accident scene is recorded by many, as a tour bus happens on the scene.  Beth is revived by ambulance workers and begins assaulting people, concerned for her own safety after being stamped upon.  The videos go online, which Beth watches after her hospital recovery, but slowly, the videos, and the people who posted them, disappear.

When Beth discovers that someone is systematically killing everyone who posted a video of her accident scene, she makes it her mission to warn these strangers that their lives may be in danger.  She also wants to know what is in the videos that is so compromising that it’s worth killing for.

The book builds beautifully to the denouement which is a wonderfully tense scene in the middle of nowhere.  If the book itself isn’t a ‘can’t-put-down’ thriller, this confrontation is, with flip-flopping roles, plenty of action, and a rising sense of fear and doom.  The conclusion comes, just as you might expect with a thriller, with a quick breath of relief, and then another heart-stopping moment.

This is a thriller in the classic vein of thrillers.  It is almost formulaic in its construction and delivery.

But … yes, there is a ‘but’ … this book also relies on another formulaic trait that I don’t care for.  A trait that appears too often in thrillers.

The stupidity of the main character.

Beth makes wrong choice after wrong choice.  Two incidents stick with me as simply being stupid.  First, Beth has been trying to get ahold of the paramedic who reacts shocked in the videos, at the last words from Beth’s dying husband.  Beth is told that the paramedic had died.  But when she receives a phone call from the ‘dead’ woman, who insists that she remain ‘dead’ to everyone else and lets it be known that she’s taking a real risk in contacting Beth, Beth wants to know more.  Every time the phone rings after that call, she answers by calling the paramedic by name and “Is that you?”  You know someone is after you.  You know someone wants to remain ‘dead’ but you let anyone who calls you know that you’ve spoken to the ‘dead’ person?  Is this smart?

Second…after a direct attack on her person, she gets police protection.  She has struggled to get anyone to believe that she was attacked at the car accident, but finally has convincing evidence of an attack, protection, and most likely the ability to convince the police that there’s something serious going on.  And what does she do…?  She tricks her police protection and goes off on her own.  This, more than any other action in the book, defies logic and common sense and actually made me think “You deserve whatever happens to you now.”

Looking for a good book? This has wonderful, exciting, heart-pounding writing that relies just a little too much of formulaic characters for my taste.