ROACHKILLER AND OTHER STORIES – R. Narvaez 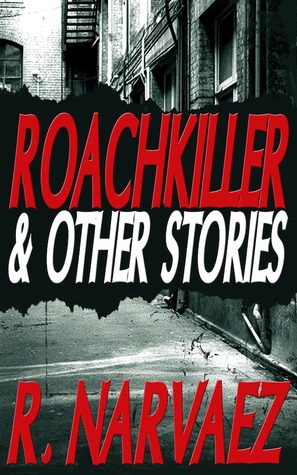 From urban noir, to urban dark fantasy, to simple, urban gut fiction (that fiction which shows us the underbelly of society), R. Narvaez’s collection, Roachkiller and other Stories, is simply good writing.

Two things struck me as I read this collection: 1) Narvaez is a really good writer, and 2) there’s a very strong ‘street’ element to most of the works here, which generally would have me feeling like a complete outsider, but Narvaez writes it in such a way that it pulls the reader in and makes him feel at home (a dirty roach-infested, stale-beer-smelling, coke-in-the-carpet home, but home none-the-less).

In most short story collections that I’ve read, I tend to know what I’m going to get … some awesome sci-fi or some dark horror or some great mysteries or some slice-of-life fiction … but Narvaez manages to pull the rug out from under us and surprise us with each passing story.  This is both attractive to the collection, and a distraction.  Attractive, because who doesn’t like a good surprise (and these are good).  But a distraction because after two or three stories that are so urban…filled with street talk and the plight of those who inhabit this lifestyle…to suddenly read something so noir-ish, takes the reader back a bit.  Or, as was my case, I recall thinking…’wait a minute…did he…is this…?  When did this become a sci-fi/Phil Dick type of collection?’ and then I had to start the story over.

…the work is very fresh, inventive, full of touches of humour, brooding violence, suspense, and damn if he doesn’t sneak some satire in there. Basically, this guy is the real deal ….

The first chunk of stories start on the streets of Brooklyn, with a pregnant numbers running housewife, and move down into Puerto Rico with the superb “Juracan” – a Maltese Falconesque story …. Later in the collection, the stories jump into the near future for some dystopian hard-boiled tales that bring up memories of Bladerunner, Oryx and Crake, and somehow even A Canticle For Leibowitz.

… I only came up with these comparisons when I started this review – in the midst of the stories, I was too lost in the characters. … What amazed me about Narvaez’s writing, story after story he came up with compelling characters that hooked me from the first page.  Sometimes he did it with an interesting POV – as in the title story. “Roachkiller” is in first person, but the lead character (recently released con and hired killer), refers to himself in the third person.

“Roachkiller knows what you’re thinking. But there was a time Roachkiller would have killed a man for a six-pack.”

… I also loved the diversity in the stories – “Unsynchronicity” and “Ibarra Goes Down” are shaggy dog noirs that play with the idea of when bad things happen to good people (which so often happens in noir). I have to admit in delighting in watching these characters spiral downward.

The closing stories with the Philp K. Dick vibe might seem out of place within the collection. I am guessing there could be another collection with just these stories. It was a risk to push the genre into sci-fi dystopia here – but I think it works. In fact, “Rough Night in Toronto,” might be the best story – a clever satire of men trying to live with (or under) machines that not only have AI, but basically run the earth. At one point a character is on an “integrated train” across from a pair of robots (known as “arties”) — “The male had a copper mohawk and a huge scarf wrapped around his neck. The female had long, copper metal tresses and had spray-painted her face pink. Liberal hipster arties. The worst.”

I don’t know why Narvaez isn’t a house-hold name.  Anyone who likes good fiction, or well-defined characters, or strong writing, should have this author on their bookshelves.  To keep with the sci-fi/Philip K. Dick theme, Narvaez’s work compares to the rawness and originality of Harlan Ellison, but perhaps with broader appeal.

Looking for a good book?  Read this collection of short stories now!

publisher: Beyond the Page Publishing

One comment on “ROACHKILLER AND OTHER STORIES – R. Narvaez”