THE BALLAD OF MILA – Matteo Strukul 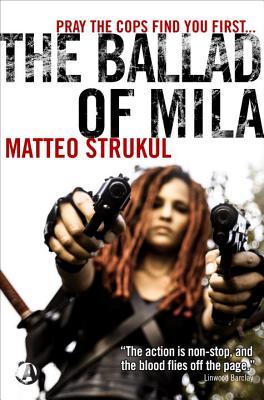 I am totally in love with the character of Mila Zago from The Ballad of Mila.  She is calm, cool, confident, and capable.  From the moment she first appears, walking head-long into a volatile situation, taking charge, and then throwing the results down in the police officers’ faces, I was hooked.  I wouldn’t want to meet her — she is singularly focussed and you are either a target, or in her way.

This book reads so smoothly.  I read it in two sittings, but only because I had spent time finishing up another book on the first day of reading this.

Mila is on a mission to join a brotherhood of bounty hunters, but first she needs to clean up her community of two rival mob gangs, one which was responsible for the slaughter of her dedicated cop father.  She withdraws from ordinary life and trains and trains and trains to become a killing machine.  People will compare this to the film Kill Bill for the obvious reason: she’s a cool, killing, femme fatale.  But Mila is so much smoother than Uma Thurman.

But Mila is pretty much the only thing that makes this story work.  Our bad guys, and there are plenty of them, are not smart.  In fact, they seem so dim-witted that we can’t help wonder how they got to be criminal leaders?  And because they are so dim, we know there will be no problems for Mila along the way — we almost wish they’d be capable of putting up a fight just so we could see what she’s really able to do.

Mila keeps a journal, which is almost a very long, detailed letter to a police officer/prosecutor, of her plans and jobs.  She also records the things she does, to have an accurate record of the events.

This journal at first seemed like a real cop-out on author Matteo Strukul’s part.  It was a convenient way to tell us Mila’s back story but I do think Strukul could have worked it in to the story a little more naturally, rather than just dumping a bunch of information on us in one sitting.  Some of the latter journal entries were a little more interesting because they hinted at what was to come, rather than just telling us some history.

There is blood.  Plenty of blood.  And there is everything gruesome and cringe-worthy that you can imagine:  Decapitation. Animal mauling. Torture. Rape. Slaughter.  It made me think that we need a “grindhouse” category for splatter-fiction such as this.

One of the things that really made Mila so attractive (beside the description of her physical beauty) was that despite the very calm, cool exterior, we do get to look at her thoughts and on more than one occasion she questions whether or not she can continue or perform the violent action.  This humanizes her to the reader and lets us see her as a person rather than just a killing machine.  I felt is was a really smart move.

We are clearly set up for more Mila Zago stories, and believe me…I’ll bite!  I want to see her in action again, though I hope she’ll be challenged a little more the next time.

Looking for a good book?  This fast-paced, bloody, action-thriller has a heroine that you can rally behind and root on from the safety of your easy chair.

The Ballad of Mila