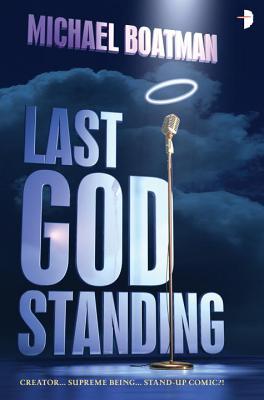 It can be difficult to sustain a sense of humor in a four-hundred page novel, but that’s precisely what author Michael Boatman sets out to do in Last God Standing.

The story follows God, who has decided to join the human race … as a stand-up comic.  A bevy of other, oft forgotten gods, vie for the throne (when they’re not too busy partying).  Lucifer has also become mortal, and God — who now goes by the name Lando Calrissian Darnell Cooper — has to keep an eye out for any potential surprise attacks.    But despite attacks from other gods and fallen angels, Lando’s greatest threat is the conservative father of his girlfriend.

The story seemed somewhat clever, though not particularly original.  There appears to be a fair amount of Neil Gaiman’s American Gods and Good Omens here, although this is significantly more ‘grounded’ — it doesn’t have the air or power of gods who can bring about the end of all times at a moment’s notice.

Which, of course, is not a good thing.

Perhaps because it is shadowed behind the veil of being a humorous novel, but there’s no punch here.  This doesn’t reach out and grab the reader and make us want to root for Lando/God.  I never felt a sense of impending doom, for anyone, with the exception of the opening sequence in which God is attacked.  There is death, destruction, and perhaps the beginning of the apocalypse, but when it’s safe to raise our heads and look around, God reverses time to avoid the confrontation and the death of the innocents.  I admit I raised my eyebrows a little — reversing time? — but I was excited and ready to dive in to the work.

One of the struggles with writing a good comic novel, is the dialog.  How can you write ‘funny’ and be realistic or true to the voice of the character.  So often, humor relies on inflection and facial expressions.  I groaned (and not in a good way) at some early dialog.  It feels like ‘low’ writing to have gods refer to one-another as “boy-o” and “missy” just to be funny.  Fortunately, that sort of humor wasn’t too wide-spread, but it did cast an early pall over the tone of the book for me.

The number and types of gods to make an appearance here (almost as if they were guest shots) was fun, but in some ways unnecessary.  If they don’t really have anything to do with the story, we don’t need to muck it all up with the extraneous appearances.

What works well are the scenes with Lando and Surabhi.  Boatman can clearly tell a story well when he is focussed not so much on the big picture, but on the ordinary.  The stand-up comic routines that are filtered throughout are also quite well done.  They are funny, and often poignant, and read well.  It was easy to visualize a comedian performing the routines as presented.

All in all…a nice attempt, with some great moments, but not a strong, cohesive novel.

Looking for a good book? This comic, fantasy novel by veteran actor, Michael Boatman, is a bit of fluff that you might or might not enjoy.  Maybe wait for the television movie of the week version.