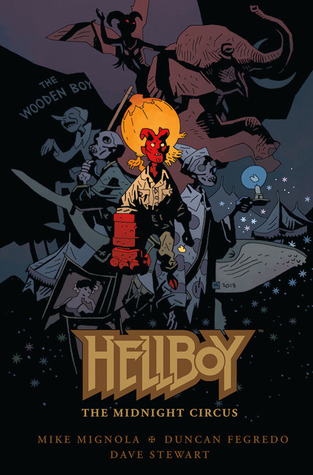 I think that Hellboy is one of the most unique and creative comic book characters to have appeared in a very, very long time.

Hellboy: The Midnight Circus is a nice little allegorical tale, not unlike that of Pinocchio, in which a young Hellboy runs away from the safety of his home and visits a circus that appears just for him.  Like Pinocchio, Hellboy learns a quick lesson in trust – trusting the wrong people and how difficult life can be without a parent or parent/authority figure.  Thinking that he’s not wanted, Hellboy runs off after over-hearing a heated conversation about his potentially being trouble.  On the surface, the circus appears to offer everything he wants: excitement, family, even a pretty mother/lover figure.  But the reality is that he’s caught and damned until his parent/authority figure comes to his rescue.

In case we are clever enough to figure out the Pinocchio comparison for ourselves, even with the scene of his being swallowed by a whale, we actually have a moment when Hellboy reads Pinocchio.  This felt a little like being hit over the head to make sure we got the symbolism.

The artwork is beautiful and appropriately dark and moody.  The story, despite its relative simplicity, is well told.  Author Mike Mignola understands the comic/graphic novel medium and how to write for it (not everyone who writes in this medium really ‘gets’ it).

But … really …?  What’s the purpose here?  This feels so much like a side-track story.  Like a time-out.  As if there was something really big going on and we needed a breather so we get this little short allegorical fluff piece as filler.  At fifty-six pages, it is the shortest graphic novel I’ve read yet.  And while length isn’t everything, it feels short.  I wouldn’t likely shell out $15 for this (recommended retail price), and I couldn’t, in good conscience, recommend it for that, either.  I would much rather have seen this as an ‘extra’ on a longer, deeper story.  Those kinds of graphic novels do so well (or at least they appeal to me), and then I feel as though I got a nice bonus when I see that short story of the character as a kid added at the end.

Looking for a good book?  This is a nicely written and drawn story of a great character, but it’s really just a short story passing itself off as a full-length book.