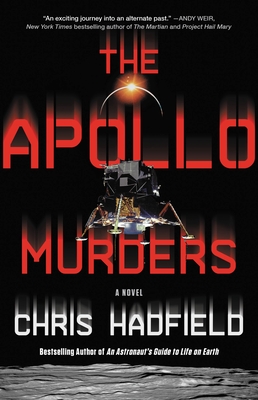 It’s 1973 and Apollo 18 is headed to the moon … but first a secret mission to destroy a Russian spy satellite that is in earth orbit.  That mission doesn’t quite go as planned and the continuing mission on to the moon (which also has a hidden agenda) is now compromised. But all involved must maintain a ‘business as usual’ attitude for everyone following the mission back on Earth. Dangers await not only at the Russian spy satellite, but on the moon and even in the Lunar Module and Space Capsule and back on Earth upon their return.

One of the really great things about this book is the authenticity. Astronaut and author Chris Hadfield certainly knows the inner workings of NASA, and although the book takes place in the Apollo era and Hadfield was a Shuttle/ISS astronaut, he captures the time and the people (as well as the Cold War tensions) quite well.

What feels most real here are those on ground. It’s a bit surprising that we do not get the sense of claustrophobia or cramped-ness inside the command module on the trip to the moon.  Those Apollo flights were in very small capsules and especially with the addition of a fourth body it would seem that we should absolutely feel or understand how this nearly doesn’t work. There’s a very simple line included noting that the folks at Mission Control have made the decision that the three bodies in the Lunar Capsule landing on the moon are within acceptable range.

It’s hard not to give some things away when talking about this book, so NOTE: SPOILERS AHEAD!!

The Americans on Apollo 18 pick up a female cosmonaut in the course of destroying the spy satellite.  They are able to bring her aboard because one of the astronauts is killed in the process.

On the moon, the American astronaut is on a mission to see to the destruction of a Russian moon rover.  The cosmonaut’s new mission is to prevent that rover’s destruction AND to recover a special rock that the rover discovered.  All of this, of course, away from the eyes of the public camera for television broadcast.

The cat and mouse game on the moon, between our astronaut and the cosmonaut, has some good tension and really is the first climactic moment of the book.  Neither cosmonaut nor astronaut trust the other, but they need each other for survival on the moon and for the return to Earth.

The second climax (a false dénouement) comes when the crew arrives back on Earth. This brief section is more “Tom Clancy” thriller than the rest of the book.

And while I enjoyed the read overall, this is my one issue with the book… the engrossing, thriller action is all bundled up in the last quarter of the book with a little bit of action about half way through, and the rest of the book is all prelude and character set-up for that little bit. While this is probably not that different than a lot of ‘thrillers’ this book does not have a cohesive feel to it.  The last portion of the book is very different than the first portion.

News that would seem to be pretty important about one of the astronauts doesn’t come out until late in the book (to give me intrigue and interest in the cat and mouse game) and I never felt it was as well developed or resolved and in fact didn’t need to be included at all, but it potentially offered a bit of a red-herring.

I loved following Hadfield during his days on ISS and I really looked forward to this book.  It isn’t a bad book, but it’s night as ‘tight’ as I would expect from any other author.

Looking for a good book? The Apollo Murders by Chris Hadfield is a mystery/thriller that packs all the mystery into one section of the book and all the thriller into another and doesn’t really keep us on the edge of our seats the way we hope a thriller will.