THE WILL AND THE WILDS – Charlie N. Holmberg 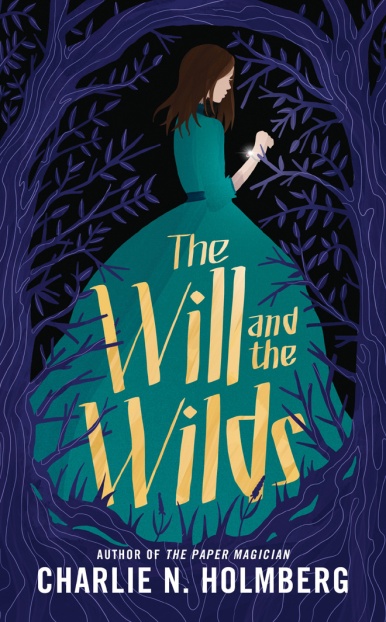 Charlie N. Holmberg’s The Will and the Wilds is a fantasy that feels deeply rooted in mythology and the tradition of storytelling.
Enna lives with her father at the edge of the wildwood – a border to the land of monsters. She was raised to exercise great caution when dealing with Mystings – a part demon, part fae creature. Enna’s grandmother kept a journal of her knowledge and experiences with Mystings, and Enna refers to it often for guidance.
The Mystings have gotten bolder and one tries to kill Enna just outside her home. Ignoring it will only serve to have more encroach on their home, so Enna feels her only option is to call her own Mysting to protect her home. But making a deal with a Mysting is possibly more dangerous than having one try to kill you.
The Mysting Enna calls upon, Maekallus, agrees to help Enna for a very simple payment … a kiss. But with a Mysting, a kiss has the power to steal one’s soul. But for Maekallus, a kiss, given willingly, will break a spell that has bound him to the mortal land. Otherwise he is soon to perish.
Enna agrees but dedicates her time to finding another way for Maekallus to break the spell so that she won’t be doomed to hell herself.
Charlie N. Holmberg has been hit-or-miss for me lately.  I think her Paper Magician series was one of the best fantasy series out there and I recommend it often.  But none of the books in the last series (Numina) grabbed my attention at all. With The Will and the Wilds, Holmberg returns to providing a truly engaging fantasy.
What captures our attention, aside from Holmberg’s lyrical prose, is the strength of Enna. There is a delicate balance between the innocent, wholesome young girl and the daring, brave youth who calls up her own demon to protect her home. Holmberg straddles that line perfectly. Too far in one direction and Enna becomes too devious and we lose interest in her. Tipping to the other side and she becomes a weak patsy who is lost and we’re okay with it.
There aren’t a lot of characters here. Enna is our main focus, and while there is a human ‘hero’ who wans to help Enna (love at first site), our real hero is Maekallus, who wants to eat the soul of the heroine. That’s not too typical. Even a character such as Enna’s father is really a minor character there to flesh out the world a little bit and make it feel like Enna isn’t alone in the world
I looked forward to reading this each day that I sat down with my Kindle.
Looking for a good book? If you like a fairy-tale style fantasy, you really want to pick up Charlie N. Holmberg’s The Will and the Wilds.