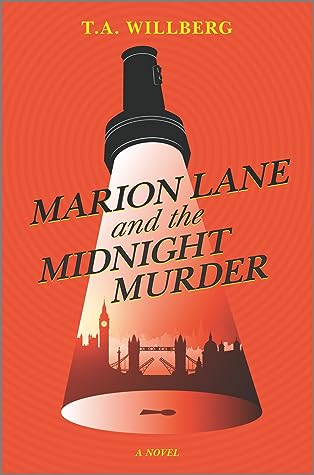 Twenty-three-year-old Marion Lane lives a rather ordinary, quiet life in 1958 London.  The toughest part of her day is living with her mother.

Marion works as an Inquirer-in-Training … a sort of detective intern at Miss Brickett’s Investigations & Inquiries.

When a filing clerk, Michelle White, receives a note that something terrible is about to happen and she goes off to investigate.  She finds an empty room, but at the stroke of the hour when the note said something would occur, she is struck dead.  All signs point to the murderer being someone familiar with Miss Brickett’s … most likely an employee.  But when Marion Lane’s mentor is accused, she knows she has to investigate.

I was attracted to the book by the hype that this mystery is solved using cunning and gadgets by a highly secretive, underground detective group. Ummm.  Maybe.  There is a highly secretive, underground (both literally and figuratively) group, but they aren’t really as exciting as the hype implies. And the gadgetry?  It sort of comes across as steampunk-ish.  Or maybe not.  Is it futuristic?  Maybe.  Maybe not.  What era is this?

In fact, this is one of my biggest issues with the book … the setting. The book seems to try to capture the mood and feel of a Victorian era novel, maybe the early 1920’s mood.  And occasionally, as I read, I would stop and think “Did they have that capability back then?” then remember that it was set in the late 1950’s and not when it felt like it was set.

There are definitely moments that I really enjoyed.  Marion’s invitation to a job at a bookstore, which turns out to be a ruse and a test of her skills, was fun and I definitely wanted to get more of this sort of action which I felt was missing overall.

I like the idea of this story, but it only promises exciting fantastical elements and fails to deliver on that promise.  Purely as a ‘locked room’ mystery, this stands tall and perhaps I would have enjoyed it more if I hadn’t gone in with some expectations based on PR.

Looking for a good book? Marion Lane and the Midnight Murder by T.A. Willberg is a decent locked room mystery and has the potential to be a decent series, but this first volume is only just fine.

Marion Lane and the Midnight Murder