THE PRINCE OF LIES – Anne Lyle 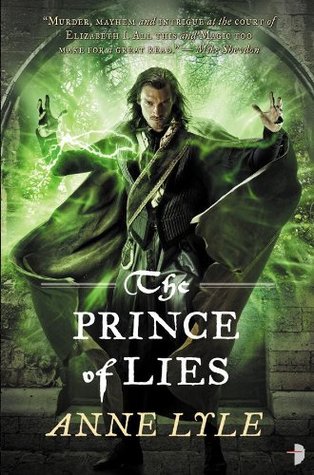 Mal Catlyn is a spy, living in Elizabethan England. Everything seems to be going his way.  He has a wife and son and they live on a nice estate. His brother Sandy is returning to full health. But he’s not quite ready to retire. Renegade skraylings, known as ‘guisers’ are gaining power. Their leader, Jathekkil, has been reincarnated as Prince Henry Tudor. Henry is young, giving Mal a chance to take the battle directly at the guisers, when they are still weak.  Though of course, taking on a member of the royal family has its own challenges.

Mal continues to learn the power of his magic, with Sandy’s help, but aspects of the coming battle were initiated decades ago. Only a spy with Mal’s abilities has even the slightest chance of keeping England safe.

This YA, alternate history, fantasy was a lot of fun.  The action begins early and author Anne Lyle never really lets up.  We jump in and we’re immediately set on a wild journey.

This is the third book in a series and I have to admit I was a bit lost.  There’s a lot of history going on with this character of Mal, and those around him. Lyle tries to give us the necessary information we need, but since this book is constantly moving forward, there isn’t much opportunity to catch up.  This is great for those who’ve been on the journey, but not so great for the rest of us.

An important part of an alternate history book is seeing familiar event and/or people from history.  Here we meet some historical figures such as William Shakespeare.  It works well – Lyle does a wonderful job of capturing these figures and making them real.  She also manages to fit these characters into the story so that it feels organic to the plot.

The story jumps back and forth in time quite a bit.  This definitely makes it even more challenging for those of us new to the story.

Overall, this was fun and I had a good time, but I was constantly feeling behind.  As enjoyable a read as this was, I think it would be much better if I’d read the previous books in the series.

As a side note, it was quite sad when Angry Robot discontinued their YA line of books. Of those that I’ve read, the quality of the works was quite high.

Looking for a good book? The Prince of Lies by Anne Lyle is a fast-paced YA fantasy, but as the third book in a series, you probably would do best to rad the previous books before starting this one.

The Prince of Lies