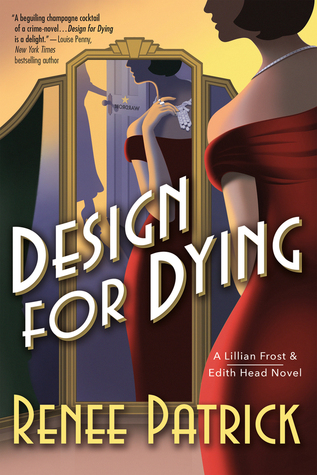 Hollywood in the late 1930’s. It is the Golden Age of Hollywood movies and some of the biggest names in films are at work, including costume designer, Edith Head. Hollywood has long had an allure for the young, starry-eyed hopefuls – wanna-be stars – and Lillian Frost was one such hopeful.  But Lillian has given up on potential stardom to work in a department store (she’s come to recognize the value of a steady paycheck) but things change when Lillian becomes a suspect in the murder of her former roommate, Ruby Carroll.

Ruby was killed wearing a gown stolen from Paramount Pictures – a gown belonging to the Edith Head collection. Edith hasn’t yet won any of her many Academy Awards. In fact, Edith is barely hanging on to her job and having one of her outfits as part of a murder scene could well derail her career, and so Lillian and Edith work together to clear their names and solve the murder. They interact with a number of now-famous personalities,

I really enjoy reading fiction (and non-fiction) about this time period. I often feel as though there is a sense of freedom, joy, and that anything is still possible when this time-period is addressed. And author(s) Renee Patrick captures this quality quite well.

The mystery is nicely laid out and overall this is an enjoyable read.  This strikes me as a good beach read.

So why only three stars?  The character development is really lacking for me. The bond between Lillian and Edith comes about out of nowhere and is quite strong, but it never ‘feels’ real to me. Also, Edith Head, being a relatively famous figure, I’ve had my own impressions of what she might be like and how she is depicted here does not coincide with my own image of her, and while I might be willing to change that impression, there is nothing in this story that has me ready to make the change,

All the rest of the characters are moderately flat and it’s the time period and the mystery that keeps this story interesting.

Looking for a good book? Design for Dying by Renee Patrick is a light-hearted mystery set during the Golden Age of Hollywood and is a good beach read for anyone looking for something to bring along to the shore.