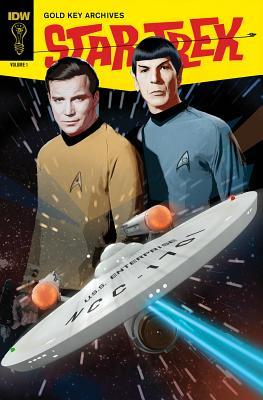 I became a Star Trek fan in the early 1970’s (just after the regular broadcasts ended) and searched for anything Star Trek that I could get my hands on. The Gold Key Star Trek comics were one of the only ways for a teen to keep the Star Trek adventures alive back then. I’d heard that IDW Publishing was going to bundle and reprint the old comics and I really liked the idea of being able to revisit these ‘classic’ comics.

What first strikes you, especially if you are at all familiar with Star Trek (and why would you be reading this if you weren’t?) is the apparent lack of familiarity with Star Trek by the artists and the writers.  This is addressed in the introduction and it turns out that in fact the creators of the comic were not familiar with the material. They’d been provided with a few simple publicity photos and a general run-down of the crew and the show’s premise.  Given this, the work is remarkably interesting.

I borrowed this book through the Amazon Kindle Unlimited program.  This is one of the first comics/graphic novels I’ve done through the Kindle app (I read this using the app on my phone) and I was really impressed with the formatting.  Amazon has managed to allow a comic reader to read each panel individually – and in the case of full page or large panels, zoom in to specific areas before showing the full page – so that the reader can easily see and read the comic.  I had imagined that I would struggle to read a comic on my kindle, much less my phone, given the amount of art and dialog on a page of a comic. But this process was seamless and made for easy reading and enjoyment.  I can definitely see myself reading more comics/graphic novels using this format.

Looking for a good book? For a sense of nostalgia and a reminder of the early days of Star Trek, reading this compilation of comics, Star Trek: Gold Key Archives Vol. 1, is a great deal of fun.

I borrowed this book using the Kindle Unlimited program.