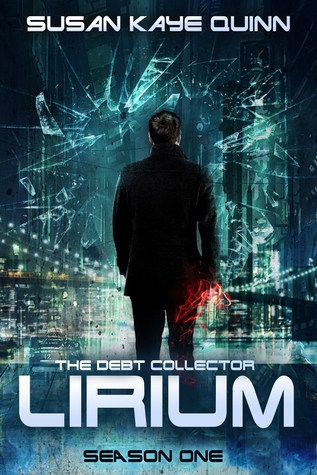 There are some perks to reviewing books (of course).  One is getting a chance to read new books by favorite authors, but perhaps the greater perks is ‘finding’ new talent.  More often, however, we find the ‘almost-but-not-quite’ talent.  Debt Collector Season One, by Susan Kaye Quinn falls into the latter category.

In a dark, noir future (ala Blade Runner) ‘debt collectors’ are agents charged with collecting life energy from some and giving it to others who are more worthy. But life energy goes for big bucks on the black market, which can be pretty tempting, even for a Debt Collector.

Lirium is not what one might expect from an angel … er, from a Debt Collector.  He works job to job, collecting his percentage from his collected life energy and drowning his misery in vodka. But when he stops to listen to someone whose life energy he intends to harvest and instead helps her do an illegal reclamation, he begins a downward spiral he may not be able to get out of.

Author Susan Kaye Quinn has developed a really great concept and Lirium starts off an interesting anti-hero.  The opening sequence really grabs attention and pulls the reader in. Quinn’s prose is strong and engaging. The concept is fascinating. What doesn’t work, however, is the character-building. Lirium is a rather one-note anti-hero.  What is interesting once dulls down as it is repeated time and again.

The book is written as a serial and while that may be great in whatever format this was first printed in, it doesn’t work very well as a novel. Not in this case at least.  This feels like a series of short stories loosely tied together, which is essentially what it is.  And while there’s nothing wrong with a series of short stories tied together (I’ve seen it work), the problem is that we get basically the same scenario over and over and there’s no character growth.

There’s plenty to like here, but just as much that holds it back from being a fully recommended book.

Looking for a good book? Debt Collector, Season One by Susan Kaye Quinn has a lot of promise and some strong writing, but the characters are a bit flat and we get stuck in a repeated cycle of behavior.