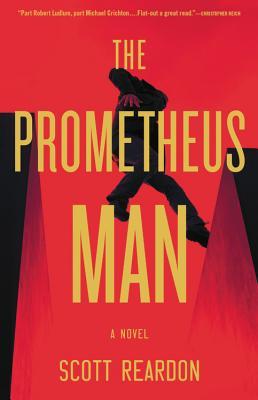 CIA agent Tom Blake hustles in on the French police when a pile of bodies are discovered in Paris.  Blake has a lot of inside knowledge and works swiftly and deliberately, impressing the French.  But there is just one problem.  CIA Agent Blake is actually on assignment in Africa and the man in Paris using that identity is really Tom Reese … an American searching for the men who killed his brother.  At least one of the men behind the murder is a genetically modified man – a Prometheus.  But Reese has a few secrets up his sleeve.

Along the way, Reese, in between stealing cars to make a getaway and pursuit, picks up a woman who was in trouble.  And she happens to be the daughter of one of the men Reese is searching for.

The opening sequence – in fact the opening few chapters – really brings the reader in to the story.  Both the action and the intrigue are high and this looks to be a really exciting book.

And then Reese picks up Silvana.

Author Scott Reardon tries to keep the pace high, adding a little chase with the complication of Reese trying to protect the woman as well as continue with his goal, but the book gets bogged down with silly tête-à-tête between the two.  Though Silvana has no reason to confide or trust Reese, other than the fact that he rescued her from another situation, she does just that – trusts him.  In fact, the two have a goofy little teasing conversation about this:

“Of course I can’t really trust you, can I?”
“No, but think of it this way. I just saved you from two men trying to drug you and stick you in their van. How much worse could I really be?”
“No, see, what you were supposed to say was ‘You can’t really trust me’ and leave it at that. Then I’d at least know you were somewhat honest. Instead you were clever. And a woman should never trust a clever man.”
“So she should trust one who’s not clever? Who’s, what, some kind of refreshing simpleton?”
She didn’t say anything.
“You know, anyone who’s motivated enough to do what those men almost did is motivated enough to keep trying.”
“Berlin,” she said softly. “Would you take me that far?”

And much later, after they’ve been through quite a bit, she says:

“I don’t know what it is, but something about you keeps telling me you’re a good person even though I hardly know you and”—she laughed sadly—“I really have no reason to trust you.”
He went to walk past her. She shifted her bodyweight, leaning in his way.

From the moment Silvana enters the book, we go from an action thriller that showed a lot of promise to a wannabe Bourne or Bond, but this clearly isn’t Reardon’s strength.  Reese has motivation to find his brother’s killers, and Silvana is not an obstacle that he needs to overcome to get to his goal – instead she’s a distraction and a distraction is not just a distraction for Reese, but for the reader as well.  A romance – even an unlikely romance – can certainly be exciting in a thriller, but this goes on too long to just be a little sideline action.

The ‘Prometheus’ aspect is interesting (though not a particularly new idea), but it gets lost behind the addition of the girl – though she does serve as a catalyst for Reese to dump a lot of info – which is an annoying way for the reader to suddenly get a lot of information.

I wanted to like this book, and I did at the beginning, but I grew bored once the initial action came to a halt.

Looking for a good book?  The Prometheus Man by Scott Reardon, starts out an exciting thriller with some secrets, but turns into something much less interesting the deeper we get into the book.

Quotes are from an Advanced Reading Copy of this book and may not reflect the final, printed version.