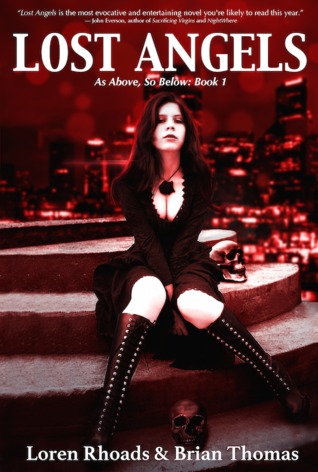 The angel Azaziel was sent from above to watch over mankind in their earliest days, but Azaziel fell in love with a granddaughter of Cain and he and she lived out her life in love and joy.  But Azaziel suffered for his once love.  Now he is imprisoned in the Lost Angeles city area (how appropriate!) and mocked by the other series of fallen or lost angels because they don’t understand his longing for love.

On the other side of the spectrum is Lorelei, a succubus.  She knows nothing about Azaziel when she sees him, other than that he’s an angel and she knows that bringing about the fall of an angel will bring glory to hell and much acclaim to herself and so she sets her sights on taking him and taking him down.  But he has plans for her as well and we’re going to need an exorcist!

The paranormal aspect is pretty clear right from the get-go.  A succubus.  An angel.  Fallen angels.  This is definitely in a world outside the ‘norm’ but authors Loren Rhoads and Brian Thomas put this world in our backyard and it feels very real and possible.

The romance is classic romance lit style.  He has a past but wants her.  She wants him.  Both want to change the other.

And the romance is secondary to these two hot commodities – an angel and a succubus – getting it on!  And they do get it on, in some pretty steamy scenes.

This is a really nice blend of story-driven action with a pause for steamy sex, which drives the characters.  This could be erotica, except that the story is still important here – unlike much of the erotica I’ve read/reviewed here, in which the story is only a device to get to the next sex scene.

I wasn’t nearly as interested in Azaziel as I was in Lorelei and I think I would have preferred a better balance of the two, but that does change the dynamic of whose story this belongs to.

Overall, this was a fun read and I’d definitely be curious to see what happens next.

Lost Angels: As Above, So Below