THE LAST SACRIFICE – James A. Moore 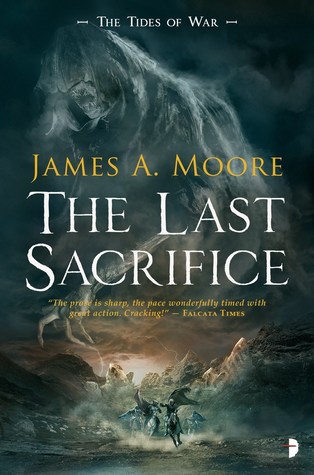 The publishing trend in trilogies has pushed authors to think in terms of a three-act story, rather than writing three individual books, and that is quite apparent with James A. Moore’s The Last Sacrifice, the first book in a new trilogy.

A race of people, known as the Grakhul, are immortal servants to ancient gods.  In order to keep the gods content the Grakhul will often provide for human sacrifices.  But the Grakhul may have made a mistake when they chose the family of Brogan McTyre – one of the toughest warrior families ever. Brogan won’t take this lying down and his fight to protect his family has him re-thinking the purpose of the gods.  But the gods have been ingrained in the culture and it’s not easy to convince the population to challenge everything they’ve known.

The story is at once a tight, immediate story about Brogan and his family as they are pursued and they try to make sense of the order of the gods, and it’s also a grand story with the gods keeping a balance between order and chaos.  I really appreciate this sort of book that can be about something personal and have epic complications.

Moore’s writing is smooth and the book is full of action and it moves swiftly from moment to moment, keeping the reader entranced.

But once the book is done and the reader reflects on the story we realize that there isn’t much here except the action.  The basic plot, as defined above, is laid out for the reader about two-thirds of the way through the book.  That’s right … the plot of the book is finally revealed just when it should be reaching its peak.  It does this because this isn’t really a self-contained book.  This is the set-up for the next book, which will hopefully actually give us more of a story.

Given Moore’s ability to pull the reader in, this should be a fun, exciting series, but if you want to read an exciting book (singular) then you might want to look elsewhere.  This will be a commitment to a trilogy at least.

Looking for a good book?  The Last Sacrifice by James A. Moore is an exciting beginning to a series, but you will need to commit to the entire run in order to get the actual story.

series: The Tides of War #1