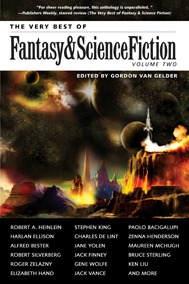 What can one possibly say about something titled “The Very Best of…”  when it’s covering stories from what is arguably the very best magazine publishing fantasy and science fiction stories? Well…you know it’s probably pretty darned good!

There have been over thirty “Best of Fantasy and Science Fiction” anthologies, collecting years and decades worth of stories published between the pages of the magazine and there’s even been a previous “The Very Best of” anthology.  That’s a lot of history of a lot of very good fiction and a daunting task for editor Gordon van Gelder to select the very cream of the crop.

The book opens with a story from 1952, “The Third Level,” by Jack Finney. The story manages to reflect the thoughts and fears of its time, while remaining timeless (perhaps because our thoughts and fears don’t change so much, after all?).

I won’t go through, story by story – there were a few that didn’t really have much impact on me (it’s the same when I read this, or any other, magazine) – such as C.M. Kornbluth’s “The Cosmic Expense Account” and Robert Heinlein’s “‘–All You Zombies–‘” and “Attack of the Giant Baby” by Kit Reed.

But more often than not I was impressed by the stories …only a small handful that I remember reading back in the late 1970’s/early 1980’s when I subscribed to the magazine: “Jeffty is Five” by Harlan Ellison is such a story, as is George Alec Effinger’s “The Aliens Who Knew, I Mean, Everything.” Ellison’s work was always cutting edge and ‘Jeffty’ is one of the classics that continues to stand the test of time. Effinger is someone who’s work I saw a lot of at the time but who doesn’t have the following that he should.  This is a great way to introduce him to new readers.

I stopped reading F&SF in the 1980’s – not because I wasn’t interested, but …well…life happens sometimes.  My point, though, is that the writers here that appeared in the magazine after the 1980’s are authors who are ‘new’ to me (though I’ve recently become acquainted with those still publishing). I enjoyed Charles de Lint’s “The Bone Woman” and Maureen F. McHugh’s “The Lincoln Train” – an alternative history story.

“Maneki Neko” is by Bruce Sterling – one of my favorite ‘new’ authors (though he’s pretty established now) and this story shows his deft hand.  He’s known as one of the leaders of the ‘cyber-punk’ category and here he combines his noted cyberpunk skills with humor.  A fun story, and it’s these fun stories that always made me appreciate Fantasy and Science Fiction.

As I wrote at the top, there’s a lot of good fiction here, since it’s the best of the best, and it’s difficult to choose an absolute favorite, but Paolo Bacigalupi’s “The People of Sand and Slag” would be my selection for most powerful, moving story.

Looking for a good book? The Very Best of Fantasy and Science Fiction, Volume 2, edited by Gordon van Gelder is a book that can’t help but appeal to anyone who already loves the genre and is a great way to introduce great science fiction and fantasy to new readers.