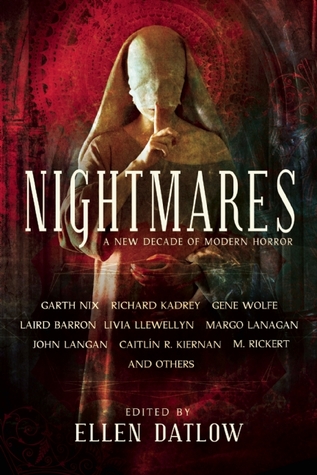 There was a time when I sought out collections of horror stories.  I couldn’t get enough.  Today, with my literary tastes having expended to include more genres, I don’t often read much horror any more.  And what I have read hasn’t been as thrilling as I remember it from my teens.  I’ve thought that perhaps the writing of horror became a little predictable.  The stories often lacked a finesse that I remember with some of the ‘masters’ of the genre. But I’ve kept looking.

Ellen Datlow often puts together a fantastic anthology and so when I saw her, Nightmares: A New Decade of Modern Horror, I thought that this might be a great way to catch up on some of the ‘newer’ writers.  And I’m glad I took the plunge.

Nightmares offers up some of the best horror short fiction I’ve read in a while.

The opening of any short story or novel often sets the tone for what’s to come, and I’ve come to really value the start of a good horror story.  How can you go wrong with beginnings like:

If you’ve been out of college for much longer than a year, nobody has anything to tell you after midnight that you want to hear.  And could you bring a shovel? I can’t find ours. Things like that.

I have a collection of baby teeth, sent to me by recovered anorexics from the ward. Their children’s teeth, proof that their bodies are working.

Brian Hodge’s “Our Turn Too Will One Day Come” and Kaaron Warren’s “Dead Sea Fruit”, respectively, are just the two that really stood out to me as capturing me within the first line or paragraph.  But of course it takes more than a good opening to tell a good story, and fortunately this anthology is packed full of some pretty strong horror stories.

I realize that I’ve often written that I can’t pick a favorite from other anthologies or collections I’ve read, but in this case, I can.  “Mr. Pigsny” by Reggie Oliver really stood out to me.  It carried the feel – the tenor – of the classic horror stories I remember from the 1970’s and ’80’s.  I’m definitely interested in reading more Reggie Oliver.

“Omphalos” by Livia Llewellyn piqued my interest but it was a story told in second person and I’ve often found that horror has more second person stories than other genres because it’s a cheap way to try to get the reader invested.  When I see the format (second person) I’m immediately put off because I’m thinking that the author is taking a short-cut to the horror because they can’t do it in first or third person (which I realize is probably not a fair generalization).

This was a nice collection that showed me that the new wave of horror is generally in good hands and that there are some very good writers to keep an eye on.

Looking for a good book? Nightmares: A New Decade of Modern Horror, edited by Ellen Datlow, is a fine collection of modern horror with a few outstanding stories to really make your skin crawl.