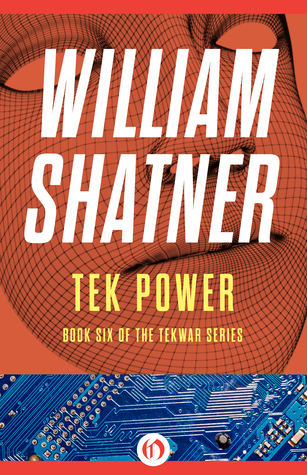 If you combined Captain James T. Kirk with Sergeant T. J. Hooker you’d get Private Investigator Jake Cardigan.  If you don’t already know who Captain Kirk or T.J. Hooker are, you’re probably not going to be interested in this book.

William Shatner is listed as the author on this book six of the TekWar book series.  The series features a P.I. in the future and ‘Tek’ is an illegal, digital drug that comes as a microchip.  In this volume, a drug cartel has plans to kidnap/kill the U.S. President and replace him with an android.  The plan is already in action as the president, a Tek addict, has been hospitalized and an android is in his place and no one realizes.  Jake and his partner, Sid Gomez must expose the plot or the real president will die and the All-American way of life could be gone.

This is actually a pretty good idea for a story (and it’s been done very well recently with the “Nexus” books by Ramez Naam), and even given that it was written two decades ago and it hasn’t aged well (VCRs?) there is some fun here.  For a book about drugs and kidnapping the president, it’s a pretty light-weight book.  Our protagonists go from one lead or source to another with a comical regularity with an occasional chase or fight in between leads.

There is also an attempt at a lot of humor inside the story – this is not surprising given that the book is ghost-written by Ron Goulart, an author who wrote a lot of humorous sci-fi in the 1970’s and 1980’s.  But the humor also feels a bit dated.  Things that I thought might be funny when I was in my teens or twenties (such as getting the hispanic/latino name wrong) are not very funny now, in my mid-fifties.

I never really bought into the characters.  Of course it was hard for me not to picture William Shatner as Jake Donovan, and while that might have worked in the 80’s, picturing the Shatner of today trying to carry off this role now…?  It didn’t help my reading.

The series clearly has a following (the books have spawned comics, movies, and a television show), and this particular book isn’t a bad read, but it’s not particularly memorable either.  I can’t recommend it but if you come across it and choose to give it a read, it would be a decent way to spend a few afternoons.

Looking for a good book?  Tek Power, by William Shatner, is the sixth book in a series about a detective in the future.  It is dated and not nearly as intense as one might expect from a book about detectives and drugs, but it’s a pleasant way to pass some time.