LETTERS FROM A MURDERER – John Matthews 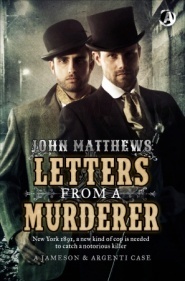 It is the last decade of the 19th century, in the middle of the second industrial revolution.  New York is just beginning to truly define its character as a metropolis, and with this sort of sprawling and uncontained energy can come a side of mankind that is undesired.  Thieves, murderers, gangs, corruption and vice thrive in such a situation.

The murder of a prostitute in New York at this time might otherwise be unremarkable and generally ignored, but there is a resemblance in this murder to a series of murders across the ocean in the Whitechapel district of London.  Is it possible that the murderer, known only as Jack the Ripper has crossed the ocean and is now working his demented trade in the United States?

Detective Joseph Argenti is selected by New York’s mayor to work with the original Ripper investigative pathologist, Finley Jameson, to solve the crime and stop the Ripper before he can continue to cause panic across the country.

Author John Matthews has put together a tight mystery, complete with a few red herrings, directing and diverting the reader to different people along the way.

I am moderately well versed in Ripper history, having researched the subject for multiple projects and I recognize and appreciate Matthews’s own work to write on the subject well.  I did find the new letters, written to taunt the detectives, to be a bit more intelligible than those sent to the papers in Whitechapel during the original Ripper killings.

The story itself is interesting and carefully plotted.  It is not what I would consider to be a fast-moving thriller.  This is more along the lines of a Sherlock Holmes mystery with information coming in and the detectives tracking things down.  And while there’s certainly a mystery that needs solving here, the book is really about these two individuals, which makes it much more interesting.

But I have to admit that I was never fully engrossed in this book.  This is one of those that I started, had to put down because I couldn’t really get into it, and then came back to again.  I still couldn’t get really involved with it, and I couldn’t ever fully appreciate or care about the characters.  But I pushed on through.  And while I found it interesting, I can’t say that I was fascinated enough to really care enough to look forward to another book with these characters.

Looking for a good book? Letters From a Murderer by John Matthews draws on the famous Jack the Ripper murders and extends the hunt to the United States with a pair of unlikely detectives teamed up to stop the terror.  It is an interesting, though slightly slow, mystery worth reading if you are fans of the Sherlock Holmes style mystery.

Letters From a Murderer