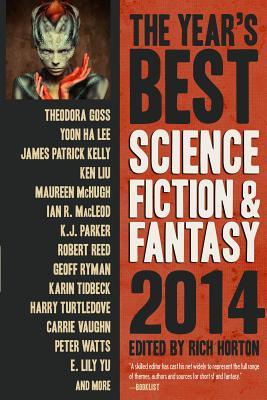 I’ve come to realize just how vital is the role of editor in a ‘best of’ series such as this.  Not too long I reviewed The Best Science Fiction and Fantasy of the Year, Volume 8 (2014).  What is the difference between that collection and this one?  The stories, as selected by the editor.

You might think that there would be a lot of over-lap between the books — both claim to be presenting the best of the year — but in fact, there is very little over-lap.  And the difference between the two books boils down to editorial choice.  Having read both of these collections, I would have to say that my own tastes tend to be more closely aligned with Rich Horton’s, as I enjoyed more of the stories in this particular collection.

Although Joe Abercrombie’s “Some Desperado” may be my favorite of the two collections (it was in Jonathan Strahan’s collection and not in this one) I enjoyed more, overall, from this.

My favorite story here was also in Strahan’s collection, “Rosary and Goldenstar” by Geoff Ryman.  My having a strong, professional theatre background (having worked with a Shakespeare festival and on an original play featuring John Dee) likely has influenced my appreciation for this story.

It’s been a long since I read anything by Eleanor Arnason, but her “Kormak the Lucky” is a great way to finish this book.  it was like reading one of Snorri Sturluson’s Eddas!

“Grizzled Veterans of Many and Much” by Robert Reed was a tremendously interesting story.

E. Lily Yu is deservedly featured twice in this book, once with “Loss, With Chalk Diagrams” and with “Ilse, Who Saw Clearly.”  Both are marvelous stories.  Yu is quite masterful at hitting the reader with some subtle emotions that take root and grow in the reader.

I’ve become familiar with Peter Watts through the book Echopraxia, and his story here, “Firebrand,” is a really fun look at spontaneous combustion (if such a thing can be ‘fun’).

Linda Nagata’s “Out in the Dark” is almost a classic sci-fi story in the sense that it explores some theoretical ethics issues.  This was very interesting!

“Call Girl” by Tang Fei and translated by Ken Liu was really interesting and had me wondering what was happening and where the story was heading.

All in all…if you like sci-fi, you really can’t go wrong with this collection.

Looking for a good book?  I believe that this is, as the title suggests, The Best Science Fiction and Fantasy of 2014.

One comment on “THE YEAR’S BEST FANTASY AND SCIENCE FICTION 2014 – Rich Horton, ed”