NIGHTWING VOL. 3: DEATH OF THE FAMILY 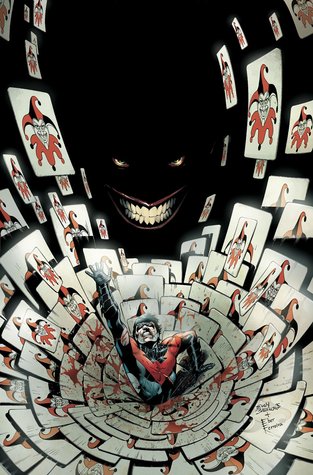 If you have followed any of my reviews prior to this, you won’t be surprised to see another “Death of the Family” story in graphic novel form (and there are more to come).  I received a number of these books from DC Comics to review.  This time it’s “Nightwing’s” turn at the story.

Also, if you have read any previous reviews, you’ll know I’ve commented on their (DC’s) decision to reprint 33 pages of story and art in each of these books to date.  These 33 pages are the climactic scene from the Joker storyline.  it flowed very nicely in the Batman graphic novel i read, but has not been quite so nicely or easily added to some of the other books.  With Nightwing, that 33 page scene comes first in the book.

While I still don’t like the idea of a complete 33 page reprint (I still think that they should have used that scene and that basic dialog, but inlcuded it from our current character’s point of view (what was Nightwing thinking or doing during these moments with Batman and the Joker?)), this surprised me by leading off with a previous comic’s denoument.  What that does, though, is almost what I’ve been asking for … it allows Nightwing to use that moment as a springboard to develop his own story.

There’s some cross-over with figures from the other books, and it feels a little forced, but when Nightwing moves off to his own story-line and battles beautiful Lady Shiva, the book picks up and delivers a nice, enticing, exciting story.  The story Nightwing experiences is perhaps not as earth-shattering or hold the same stakes as that which Batman goes through, but Nightwing’s touches the reader on a much more personal level.  We get the sense that he’s trying to do something good, as his non-hero personna, but his hero-nemesis destroys all he’s worked for.

One interesting aspect (SPOILER ALERT!!!!) … because we start with the climax of the Batman story, and the Joker’s apparent fall to his demise, the Joker’s later appearence in the Nightwing book clearly indicate that the joker is still around.  We knew it would happen.  I just didn’t expect it quite so soon.  The Joker’s portion of the story, at least ties in well, but it’s the other story-line here that has captured my interest and actually makes me want to read on.

The artwork is fair — a little uneven at best.

Looking for a good book?  This is a graphic novel that will have you wanting the next issue at your fingertips.

Nightwing, Vol. 3: The Death of the Family