HOW THEY WERE FOUND – Matt Bell 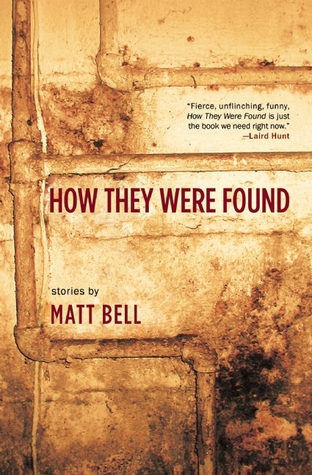 How They Were Found is a collection of thirteen short stories by Matt Bell.

There doesn’t appear to be any unifying theme to these stories other than that there written by Bell and perhaps that Bell is showing how much he enjoys playing with form.  Perhaps a sense of loss, might unify the stories, though the title of the collection rather denies this connection.

Typically I don’t care for stories that feature form over storytelling, but one of my favorite stories in this collection is “An Index of How Our Family Was Killed” which is pretty much just what the title implies … an index, or a list, of how people were killed.  Somehow, through the dispassionate method of a simple list we get a sense of the resignation and despair of a dead family.  A thought-provoking ‘story’ and one of the few times that the uniqueness of form actually worked to tell the story.

“Dredge” also stood out for me, but then I tend to like the more macabre stories and the idea of preserving dead bodies certainly is macabre.

On the other end of the spectrum were stories like “Mantodea” in which – well, how do I put this? … a man has an adventure with the mouth of a lady at a bar. I got nothing from it and was really just annoyed at the time I spent reading it. And “Wolf Parts” which was a re-boot of the Little Red Riding story.  Fairy Tale re-tellings are popular and there are too many people doing them, and typically much better than this.

The rest of the collection falls somewhere in between these which makes this collection a very average, uneven read.

“The Cartographer’s Girl”
“The Receiving Tower”
“His Last Great Gift”
“Her Ennead”
“Hold On To Your Vacuum”
“Dredge”
“Ten Scenes From A Movie Called Mercy”
“Wolf Parts:
“Mantodea”
“The Leftover”
“A Certain Number of Bedrooms, A Certain Number of Baths”
“The Collectors”
“An Index of How Our Family Was Killed”

Looking for a good book?  If you like stories than play with form more than tell stories, and have an edge to them, then How They Were Found by Matt Bell is a collection you might enjoy.

How They Were Found