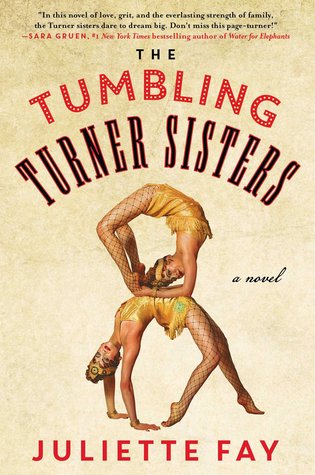 I’ve found that I really enjoy historical fiction and there have been some really outstanding titles in that category in the last few years.  And when I saw that there was this book, The Tumbling Turner Sisters by Juliette Fay, which centers around some performers in vaudeville, I knew this was something I had to read.

Fay is clearly a fan of the period and has done a tremendous amount of research to get at the heart of vaudeville – the real vaudeville, and not just the Hollywood version of vaudeville.

It is 1919 and the Turner family is just barely getting by on the meager wage Mr. Turner earns as a boot stitcher.  But when his hand is crushed and he’s no longer able to work, the future looks bleak.  Ethel Turner, the family matriarch, takes matters into her own hands and decides that the girls, teenagers, need to perform a sister act on stage.  She settles on acrobatics and sets to work training and rehearsing the girls.  Gert, Winnie, and Kit are the girls still at home, and Nell becomes a widow with an infant and joins her siblings on stage.

But vaudeville has its own set of challenges and the Tumbling Turners have to learn the ropes as they go and other performers may prove to be close friends or bitter rivals.

Juliette Fay weaves so many wonderful characters into this historical tapestry and touches on many important historical moments. I found the situation with the black tap-dancer, Tip, to be most interesting, with the showing of Birth of a Nation and the subsequent assault on him uncomfortable prescient of what has happened in the world around the time I write this review. But I found the relationship between Winnie and performer, Joe, also quite interesting.

The history in the book really works and the characters are nicely defined and unique, but too often it just didn’t quite hit the mark for me.

Despite all the troubles and the worries, I never sensed the desperation that I thought was trying to be there.  The girls were often oblivious to the troubles, though I could accept that given their youth.

The journey was interesting, watching the Turner’s progress, and yet it never really seemed to be emphasized (though at least mentioned) that the sisters were growing up in a rough show-business setting. We learned that they were out-growing their costumes as their bodies developed, and they took to developing relationships with other performers, but I never got a sense of how Ethel felt about this.

But most of all … I’m not sure what the story is trying to say.  It’s a little (fictional) slice of history, but where is the story going?  What are we, the readers, to take away from this?  I can’t really tell you.

Looking for a good book? The Tumbling Turner Sisters by Juliette Fay is a well researched historical novel in the vein of Water for Elephants or The Other Einstein, but it doesn’t have a clear goal for the reader.