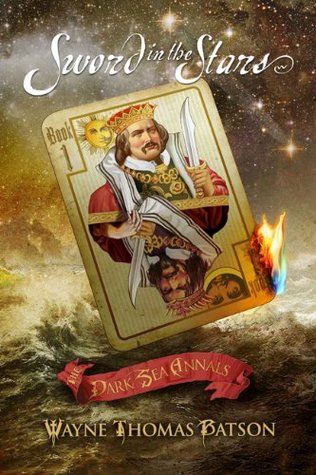 I’ve been making it a goal to catch up on my back ARC reading and this, at the time of my reading, is the oldest in my ARC queue, so it’s nice to check it off the list.

Alastair Coldhollow is a former assassin who is repentant and haunted by his past.  He is searching for a prophesied Savior,  Halfainin, who will supposedly come to save the kingdom of Anglinore when the sword in the stars appears.  Anglinore, meanwhile, is at war with the Gorracks. King Aravel considers advice from his brother, Morlan, and the pregnant Queen Mariel doesn’t trust her brother-in-law but decides to visit his castle in the hope she can smooth tensions.

First – I am not familiar with author Wayne Thomas Batson, but I since see that he’s moderately well-known as a Christian fiction author.  While that may not have been obvious before I started the book, the themes and parallels here make it pretty clear.  This is not a big deal to me.  I’ve likely read more Christian fiction than the average bibliophile.  But the themes were pretty overt and obvious, which I didn’t care for.  Just give me a well-told story and let me make the connections through careful reading.

Second – this is an epic fantasy.  There is some major world-building going on, and a cast of characters that would make Tolkien blush. If I give the impression that there was too much of both, then I’ve done this correctly. The first two-thirds of this book was an absolute struggle to read. I spent so much time trying to figure out and remember the characters that I didn’t really care about the characters.  And given that the world seemed like every other sword-and-sorcery fantasy world I’ve read, we spent more time than necessary defining it.

Third – info dump.  I really dislike a massive info dump in my fiction.  This book has page after page of drawn out story, and suddenly we get this huge info dump through a series of letters. It comes across as though an editor told Batson that the book was too long already and needed to tighten it up, so instead of showing us another 200 pages of story (thankfully), he tells it to us in one chapter of letters from the key players.

The book does pick up and is actually interesting after the series of letters, and my guess is that if you simply started with the series of letters you’d still get the gist of the story and could just enjoy the action that comes afterward.  I actually liked what Mariel learns about Alastair’s fate – which I should have seen coming, but didn’t.

I give this two and a quarter stars based simply on the last fifth of the book, but I’m not particularly interested in reading more.  There’s a lot of epic fantasy out there that is worth the time, and if I want something with a stronger Christian theme, I’ll re-read the Lord of the Rings.

Looking for a good book? Wayne Thomas Batson’s Sword in the Stars is a Christian-themed epic fantasy that takes too long to develop, making it hard to care about the characters or their situation.

Sword in the Stars