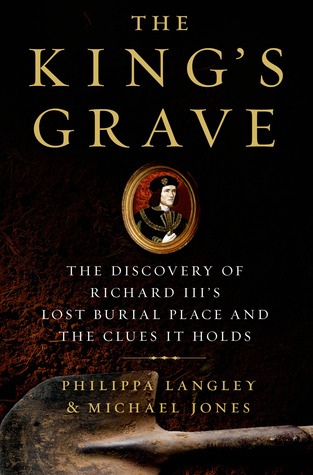 On the one hand you might think that the discovery of the burial location for one of England’s more (in)famous kings would be much bigger news.  On the other hand, the fact that I hadn’t been aware of the discovery of Richard III’s remains might be an indication that it’s not as earth-shattering as some (particularly the authors) expect.

Like many people my knowledge of Richard III comes from Shakespeare’s play.  I recognize that the play, while labelled as one of Shakespeare’s “history” plays, is not an accurate accounting of history.  It was written for dramatic appeal.  It was based on other historical documents that Shakespeare likely referenced.

One of the very nice things about this book is that it is not just a day-to-day accounting of an archaeological dig, but it is also a bit of a history on Richard III.

The book got off to a bit of a rough start with author Philippa Langley describing her gut instinct and the ‘feeling’ that she was walking over Richard’s grave when visiting an area that was soon to be turned in to a parking lot. To her credit, she works determinedly to stop construction, rally support, and find the money needed to do a proper investigation and dig to unearth whatever may be below.  She doesn’t do this based on her intuition, of course.  She provides some nicely researched documentation of an abbey that had once been on the spot and the reports of a hasty burial of an important king at that abbey.

Does it hurt that Langley is also a film-maker and is documenting this un-earthing?  Not a bit.

The actual information on the dig is pretty slim.  Langley draws it out, sharing some set-backs and a lot of personal feelings.  The site is pretty well described and there appears to be a lot of history under the earth there.  But once the skeleton is unearthed and sent to a lab for investigation/testing we learn nothing more about all the rest of the history at the dig.  Is it all just bull-dozed over and turned into a parking lot?

Perhaps the most fascinating part of this book is the description of the skeletal remains and what the individual likely experienced at the end of his life (and slightly beyond).  It’s pretty horrifying, but not un-likely, given the times, the fighting, and the individual.

One thing that bothered me a little bit was how easily and quickly investigators determined that this most likely was Richard III (I’m not giving anything away … the title says “the Discovery”).  Although the authors try to tell us that those doing the carbon testing and the remains analysis weren’t biased, it did feel as though everyone was going in to it with the hopes of proving it true.

All in all, this was an interesting book and I’m very glad to have experienced it.

Looking for a good book?  The King’s Grave, by Philippa Langley and Michael Jones, is a combination history primer on King Richard III and a unique modern look at the search for, and discovery of Richard III’s final burial-place.

The King’s Grave: The Discovery of Richard III’s Lost Burial Place and the Clues It Holds