I am not an ardent believer in ghosts nor am I skeptic.  I am one of those people who believes that there is something other than our ‘normal,’ mortal lives going on in the world.  I love watching the Ghost Hunter type shows and I’ll often pick up books that explore this phenomenon. So when I had the opportunity to read this ARC, which boasts “Breakthrough Ghost Photography” I was ready to give it a read.

Author/photographer Tim Scullion has spent a good deal of time and energy photographing the Williamsburg area to get evidence of ghostly hauntings.  Judging by this book, Williamsburg must be one of the most haunted cities in the country.

To say that I was supremely under-whelmed by this book would be a gross understatement.

At first I was confused.  Where were the ghosts that Scullion says are in the picture?  Behind the light flare?  Oh … the ghost IS the light flare.  Then I found it humorous … picture after picture of the exact same thing but in different locations. At one point I thought maybe J.J. Abrams had been nearby, creating his signature light-flare look for the book. And finally I just thought it sad that Scullion spent so much time and effort on this.  If he truly believes in his work, it’s disappointing.  If he’s writing from an entertainment viewpoint to make a buck, then more power to him.

I am not a de-bunker.  I don’t have the tips and tools to go around to prove something doesn’t exist or that what is presented is faked.  But I have spent some time around a camera and it looks a LOT like Scullion’s camera has a dirty lens or a dirty mirror (if he’s using an SLR camera).  The light images he refers to constantly look an awful lot like pictures I have where there is dust or water spots on the lens or mirror (sometimes it’s not obvious to the naked eye until the lens gets cleaned).

In addition to the light-spot-ghosts, Scullion has captured a whole heck of a lot of strange figures peering out of windows.  Most of these look creepily human with slightly exaggerated appearances.  So … are ghosts blots of light, or are they humanoid in appearance?  Are they both?  Ahhh … this is feeling more and more wrong.

I noticed that we never see any of these photographs taken during the day to give us a day and night look.  Could there possibly be mannequins in these historic buildings?  Seen through the warped, older glass at night, might these not look rather ghoulish?  And maybe not just mannequins – maybe paintings, too?

And then Scullion shares his secret editing trick with the reader.  He writes:

This is an attempt to demonstrate the editing process, so that I’m not accused  of creating faces with Photoshop tricks:

Step 1: Crop the face out of the original photo. At this point, the face is usually only about a half inch.

Step 2: Increase it to a working size (about 3 inches), increase the contrast to bring out the features.

Step 3: Depixalize the face so that it does not look grainy, add more contrast as necessary, then increase the photo to its final size.

So let’s get this straight … we make it bigger, increase the contrast, depixalize, increase contrast some more.  That’s the breakthrough ghost photography trick?  Fortunately Scullion includes a sample so that we can see how this:

once it’s had some contrast work done and some ‘de-pixalation’, becomes this: 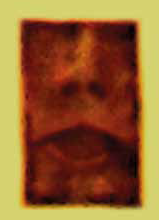 That face can clearly be seen in the original, right?  It just needed some contrast and pixalization…

At this point I felt like a fool.  There is a sucker born every minute, after all.

After all that, I actually liked the epilogue “What I’ve Learned About “Ghosts”” even if I felt that Scullion was making a bit of a fool of himself.  For his sake, I hope he takes his camera in to get professionally cleaned before he goes out to photograph ghosts again.

Looking for a good book? Haunted Historic Colonial Williamsburg by Tim Scullion offers up a lot of ‘proof’ of ghosts but this reader doesn’t buy it.