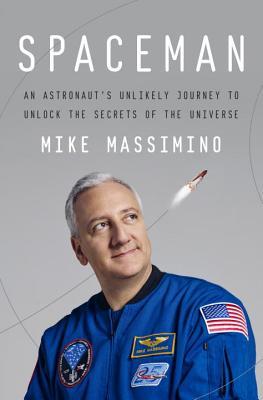 Stemming from my interest in science fiction, I have a weakness for most things NASA-related and lately I’ve noted how much I enjoy reading biographies and non-fiction, so this book was a much-anticipated ARC for me.

Mike Massimino is not a name that would be recognized in most homes today, but it’s more than likely that it doesn’t matter to Mike.  Mike is an astronaut,  a darned good one, who gave it up in order to spend some important years with his family. Still he would tell you of the importance of the space program and has represented NASA in the media.

Massimino is a product of the era.  While fascinated by space, it was the movie The Right Stuff that led to his particularly strong interest in becoming an astronaut.  And Massimino was the first astronaut to send a tweet from space, paving the way for future astronauts to take on social media and bring back a strong interest in the space program to the average Earthman.

Massimino was one of the main astronauts to work on and repair the Hubble telescope in space and yet if people recognize him today it’s because of his appearances, as an astronaut, on the hit television show The Big Bang Theory (he’s the astronaut who gives Howard Wolowitz the nickname ‘Froot Loops’). Oh how media plays such a major role in this man’s life!

One of the first things people will note about Massimino is his positive, can-do spirit.  Once he sets his mind on becoming an astronaut it never really occurs to him that it won’t happen.  Okay…that’s not quite true…. Massimino is initially passed-over for astronaut status because of his eyes.  His vision was poor enough that he could not see well without glasses, which was something that NASA could not accept.  His drive to becoming an astronaut seemed to end then, but with the help of some friends and colleagues, he discovered some cutting-edge technology that corrected his sight which, viola, got him into astronaut training!

While he doesn’t say it outright, what we see time and time again is that you often have to create your own luck.  This is something you do by putting yourself out there, not accepting ‘no’ when you don’t want to, and by having a lot of connections (and you have a lot of connections by being a positive person (who wants to hang around negative people all day?).

Despite his optimism, Mike Massimino really understates his abilities.  He’s trying, I suspect, to not look like he’s bragging or boasting so he’s really down-playing a lot of his accomplishments.  At times I found this annoying – particularly when he was talking about college and getting admitted to Columbia University.  He writes about not being that great academically – a good student, but not the smartest, not the most athletic, etc.  Still, he was accepted to this prestigious school.  That had to have come from somewhere.  I can speak as a father of a child who, top of his class, Eagle Scout, basketball, cross-country, track participant, and top band student, wanted so desperately to go to an Ivy League school but was denied to all that he applied to, that you don’t ‘just get in’ to these schools.  Something else is at play, though it’s hard to say just what that might be.  (We live in a very small, rural town in the Midwest and no one has been accepted to an Ivy League school from our 100+ year old school in its history, so it wasn’t much of a surprise.)

But that constant down-playing – ‘I wasn’t the best, but I was chosen’ – does grow just a little old.  Later on we see it’s because of his drive and his out-going personality, but early in the book it just comes across as great good fortune falling at his feet.

Massimino shines in the latter section of the book when writing about his astronaut training and experience.  His work to repair the Hubble is spell-binding in his tale and I could almost feel the exhilaration of seeing the Earth and the stars from space the way he describes it.

Massimino is also quite poetic and manages to find some beautiful ways to talk about the work that an astronaut does, and he relates it to the everyman.

If you’ve ever wondered what the right stuff is, that’s what the right stuff is—the real right stuff. It’s not about being crazy enough to strap yourself to the top of a bomb. That’s actually the easy part. It’s more about character, serving a purpose greater than yourself, putting the other guy first, and being able to do that every single day in every aspect of your life. People ask me all the time what it takes to become an astronaut. It’s not about being the smartest or having the most college degrees. The real qualifications for being an astronaut are: Is this someone I’d trust with my life? Will this person help look after my family if I don’t make it home?   …   Astronauts are exceptional in terms of what they’ve accomplished, but in terms of where we came from we’re regular people. What we have in common is this shared goal, to serve the people and push the boundaries of knowledge for all mankind.

Looking for a good book?  Whether you like reading biographies, books about NASA or the space program, non-fiction, or just a nice, positive, well-told story, Spaceman, by Mike Massimino is worth exploring.

Spaceman: An Astronaut’s Unlikely Journey to Unlock the Secrets of the Universe