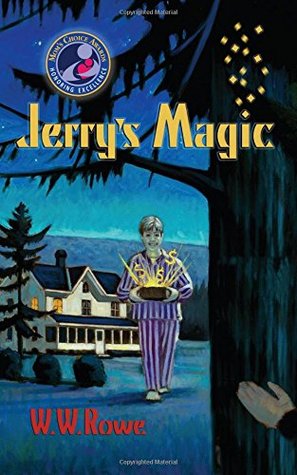 Nope. This middle grade reader falls apart on just about every level.

Jerry Shore is ten years old and is now the man of the house after his father is killed in the Big War.  As such, he finds the need to start bringing home money, but instead of going out to get a job, he finds it easier to make money by selling magic items to the locals.

What I discovered was that Jerry was a ten-year old con artist.  For more than half the book Jerry convinced some of his friends to put money in to a device he promises will enable the viewer to see through walls – specifically “for peeks into the girls’ locker room at the gym”. Of course all his friends want to be able to do this (which by itself is kind of creepy!).  But the device doesn’t actually work and Jerry has to keep putting them off and promising that it soon will, even when he knows it won’t work.  It isn’t until the school bully threatens Jerry to get a working device or give the money back, does Jerry start to worry.  He’s already spent the money. What will he do?

Author W.W. Rowe might think that the message being delivered is one of “believe in yourself and your abilities” by summing it up for the reader, but the actions of the character speak volumes more.  Preying on the peeping-tom creep in an individual and conning people to give money for the promise of something is the stronger message that comes through.

The narrative style of third person, present tense is awkward at best, often clumsy: “One hot, humid afternoon, Jerry weeds until he’s drenched with sweat, so the tipping lady will be extra generous.” “One hot, humid afternoon” comes across as past tense.  Is this not ‘today, a hot humid afternoon?’  “Jerry weeds” – present tense or past tense?  Earlier we read “Jerry laughs” and “Jerry makes good money” and someone’s “hobby is” – all present tense.  “…the tipping lady will be extra generous” future expectation.  We have past, present and future tense all in one brief sentence.  Note: I picked this sentence completely at random.

I really just feel kind of icky after reading this.  I would never be able to recommend this to anyone.

Looking for a good book?  It’s not Jerry’s Magic by W. W. Rowe, that’s for sure!