WHERE THE HELL IS TESLA? – Rob Dircks 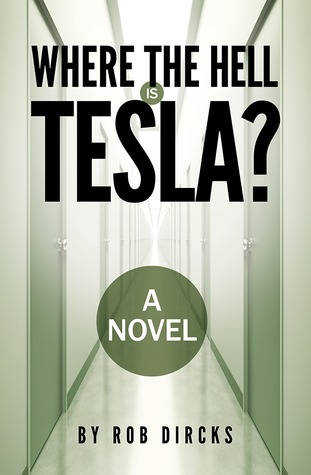 In the tradition of Ron Goulart’s What’s Become of Screwloose and Douglas Adams’ The Hitchhiker’s Guide to the Galaxy comes Rob Dircks’ Where the Hell is Tesla?

Slacker Chip, who manages to get a job as a security guard for the FBI, grabs an old desk out of a warehouse and discovers an old journal belonging to Nikola Tesla. In it, Tesla describes an inter-dimensional multi-verse, where all possibilities exist and describes where on earth the doorway to such a place exists.  With Chip’s almost-but-not-quite-as-much-of-a-slacker friend, Pete, the two buddies go off to experience the multi-verse (armed only with Telsa’s journal and a pipe wrench [used to break down the inter-dimensional door]).

Access to all the different possible realities s through a door and between the doors is an eternal hallway.  But all the doors look alike and Chip and Pete immediately forget which door they originally came through. Time to explore. But ‘all possibilities’ means just that and it doesn’t take long for Chip and Pete to discover some pretty nasty alternatives. On exploring they go, picking up a furry little creature they name Bobo (I picture something akin to an Ewok with a monkey’s head). They even become heroes in one possible reality when they arrive on a very similar reality but with only a fraction of the gravity.

Knowing that the only way they will probably ever get back to their own reality is with the help of Tesla himself, and the two goofballs set off to find one of the smartest men who ever lived in an infinite hallway of possibilities.

I listened to the Audible version of this book, narrator by the author, and I highly recommend it.  Dircks captures the personalities of our main characters so well one has to wonder if he wasn’t his own model for the character(s).

In many ways this book is not unlike a lot of epic fantasy adventure novels with the exception that this book is downright funny. But a good, humorous book finds a way to be funny AND tell a story, keeping the reader interested in what’s happening and looking forward to the central characters achieving a goal. Dircks does this all extremely well – telling a story AND keeping us entertained.

At one point it occurred to me that this was very similar to a D&D (Dungeons and Dragons for you non-geeks) quest except that instead of dungeon doors, our intrepid heroes went through alternate reality doors and instead of broadswords and longbows, they were armed with … well … a pipe wrench.

The narrative is told primarily from the point of Chip who is writing a series of emails to a girlfriend he hadn’t treated particularly well but, faced with an uncertain future now, realizes how important she is to him. It’s an interesting gimmick to have a fairly central character who doesn’t really appear in the novel (not in our reality anyway).

Chip and Pete’s juvenile behavior did grow a little tiring from time to time (I listened to this book in one long drive) and it would have been nice to have a little personal growth a little earlier, but still, for anyone who misses and craves a good humorous sci-fi book, this is just the ticket.  And of course there’s an infinite number of possible stories for future volumes…!

Looking for a good book? Where the Hell is Tesla? by Rob Dircks is a fun sci-fi comedy in the tradition of The Hitchhiker’s Guide to the Galaxy and both the book and the Audible versions are highly recommended.

I received a digital copy of this book from the publisher, through Netgalley, and the Audible version from the author, in exchange for an honest review.

Where the Hell is Tesla?

One comment on “WHERE THE HELL IS TESLA? – Rob Dircks”