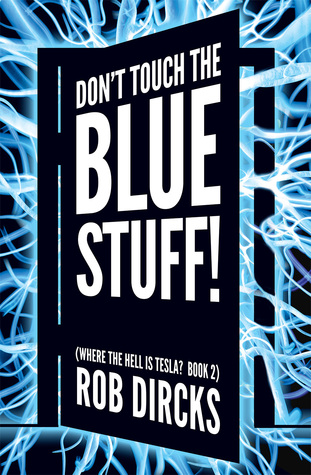 It’s hard to find good, well-written humorous science fiction. There are a few authors still writing in this genre that are worth reading and Rob Dirks is definitely one to look for.

Don’t Touch the Blue Stuff! is a follow-up to Dirks’ Where the Hell is Tesla? which I enjoyed quite a bit (see my review here).

Safe at home after saving the inter-dimensional multiverse, Chip Collins is about to marry his love, Julie when the FBI arrive to tell him that he’s needed for another mission in the multiverse. Having saved life as we know it once, he’s the dimension’s best chance at surviving a new threat from beyond the doors. Chip and FBI agent Gina Phillips will work with Nicola Tesla to enter the multiverse to save Chip’s friend Pete who has been enveloped in a strange substance called Blue Juice. But Pete may only be the first to fall to the stuff … if Gina and Chip and Tesla can’t find a way to send the goo back to wherever it came from, the Blue Juice will take over the planet, one squishy human at a time.

The book is full of quirky characters, such as ‘Bobo’ – a furry, three-foot alien that can regenerate himself like a starfish.

Rob Dirks is certainly playful and not afraid to reach low for a laugh. And that’s the one problem I had with this volume … I felt like too many things were included simply for a laugh rather than as an oddball way to twist the plot.  In fact the goal here (get rid of the blue goo) seems far-reaching and secondary to … well, to anything else we can throw at the moment.  The first book was an adventure with a clear goal … get back home.  This book appears to have a clear goal, but really it’s just a means to put Chip back in his Wonderland for a new adventure. The difference seems minor, but it was enough to have me wonder why we had so many letters home that didn’t deal with the plot.

One other difference between this book and the previous was that I actually read this book and I listened to author Rob Dirks read the first. Dirks clearly had as much fun narrating as he did writing and his enthusiasm was infectious.  I wonder if I were to listen to this second book if I might not like it more.

Looking for a good book? Don’t Touch the Blue Stuff! by Rob Dirks is a follow-up to Where the Hell is Tesla? and is face-paced sci-fi comedy, reminiscent of Douglas Adams and Ron Goulart and good for a quick read if you enjoy a guffaw or two with your inter-dimensional rifts.

series: Where the Hell is Tesla? #2