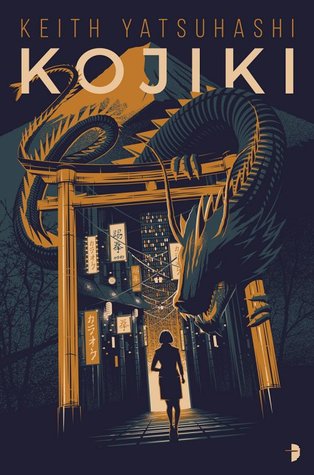 Angry Robot is a publisher that I find I really like.  I’ll gladly read anything that they publish and nine times out of ten I will be really impressed and thrilled with the book. But when they disappoint, they do so in a big way.  This one disappoints.

The opening chapter drew me and I was ready for another grand adventure.  And then it lost me – really fast.

A young woman, Keiko, travels to Japan after her father disappears but has left a note, instructing her where to go and what to do.  Sort of.  His note is a little bit cryptic, but Keiko heads off and finds a land where dragons attack subways and Keiko herself may be in line for god-hood.

I’ve tried to understand why I didn’t care for this book.  It’s entirely possible that Japanese/Chinese mythology (of which this is rife) is not my ‘thing’ since I was also not fond of Alyc Helms’ Missy Master series either. I didn’t initially think this would be the case as I’m very fond of sumi-e (a Japanese art form) and Noh theatre and absolutely love many ancient mythologies.  But maybe Japanese mythology…?

But maybe it’s not me.  Maybe author Keith Yatsuhashi didn’t spend enough time developing the character of Keiko, instead did a lot of world-building (it’s no easy feat to combine an ancient mythology with a modern world).

Maybe it’s because the narrative rambles.  This book relies on the use of flashbacks (as does Alyc Helms’ as I recall) and sometimes these flashbacks come out of nowhere.  You might be two pages in, wondering what the heck is going on, before you realize that this is a flashback scene.

The dialog never sounded quite right to me … it came across like the anime programs my children watched when they were younger.  In fact, most of this book struck me as a novelization of anime/manga shows and comics.  Keiko could easily be compared to Avatar: The Last Airbender (a show my sons watched a decade ago). And while I grew up reading comics and absolutely love mythology, I can not stand anime.  And maybe that’s the problem?  This is anime without the pictures?

Whether it’s for one of the reasons listed above, or something else entirely, this book just didn’t appeal to me, even though its basic idea seems pretty interesting.

Looking for a good book? Kojiki by Keith Yatsuhashi is a YA fantasy with a Japanese mythology theme that reads like the story for an old anime cartoon.