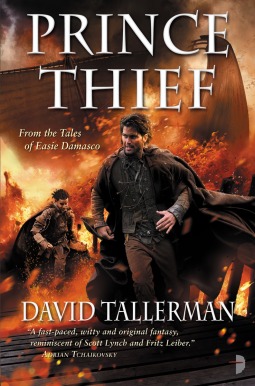 Prince Thief is the third book in a trilogy and I haven’t read the other two.  It shouldn’t be absolutely necessary to read the first two books, but as is often the case, the reader may find him or herself wondering what went on before.

Easie Damasco is a bit of a rogue.  Okay…more than a bit.  He’s a thief and he’s a bit of an ass who likes to talk.  But he’s being pushed in to  more heroic role, taking on a king who is laying siege to his own domain.  The locals hope that Easie and his giant friend, Saltlick, can use their nefarious methods to steal something precious … a person.

I didn’t know these characters at all before I started this, and I still don’t feel as though I’ve gotten to know them after reading this book.  That there is a strong bond between Easie and Saltlick is pretty obvious, and we come to like the gentle giant, but he also seems like quite a patsy – easily manipulated by just about anyone he associates with.

Damasco strikes me as the sort of character the author is hoping will be seen as the lovable rogue.  Imagine Jack Sparrow, or Simon Templar, or Neal Caffrey.  And now make him not likable and you have something closer to Damasco.

It’s hard to go into a book three of a trilogy and hope to know the characters and the world, but it shouldn’t be impossible if book publishers want to sell books.  I should be able to read this and want to go back and read the other two books.  Instead, I’m glad that I didn’t waste my time with the other two.

This books comes from my queue of ARC books and is one of the oldest I have.  At the time I requested this, I was new to the requesting and review process.  I’ve gotten much better about not requesting a book in the middle or end of a tight series or trilogy (and by ‘tight’ I mean books that require the reader to read all the books to follow the story).

Looking for a good book?  Prince Thief by David Tallerman is the last book in a trilogy and is not worth reading on its own.  Perhaps, if it appeals to you, you might want to try the first book before going in to this.