BETWEEN BLACK AND WHITE – Robert Bailey 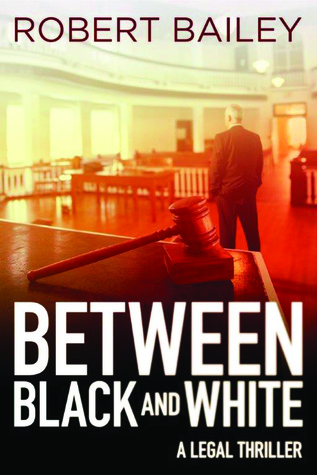 I’m really delighted that author Robert Bailey found a new publisher for his McMurtrie & Drake series after Exhibit A Books shut down.  But I’m not surprised that someone else picked this series up – Bailey writes just about the best legal thrillers being published today.

Tom McMurtrie is a retired law professor.  A former student of his, someone he mentored and who went on to a successful career as an attorney has called and asked for his help.  Bocephus “Bo” Haynes was a child in Pulaski, Tennessee in the mid-1960’s, when he watched ten members of the local Ku Klux Klan takes his father and hang him from a tree.  Bo never forgot the horror of this, nor the voices of the men behind the hoods.  After graduating from law school and playing for Paul “Bear” Bryant (which netted him some recognition and fame), Bo moved back to Pulaski and became very vocal about his goal to bring the men who killed his father to justice.

On the anniversary of his father’s killing Bo sits in a local bar and threatens Andy Walker, a man Bo knows was the leader of Klan that lynched his father.  The problem now … Andy is murdered not long after Bo threatens him – in front of a number of witnesses – and all the physical evidence points to Bo as well.  But Bo swears he didn’t do it, even though he can’t remember anything after talking to Andy in the bar.  And so he hires the only lawyer he knows who might be able to save him … his professor, Tom McMurtrie.  Tom, and his assistant, Rick Drake, definitely have their work cut out for them.

Just as with the first book in the series (see my review here), Bailey has written a tremendously exciting thriller.  The roots of the drama are deep and racial prejudice is a hot-button topic.  It doesn’t seem like Bo has the remotest chance of being acquitted, though as readers we suspect McMurtrie will find a way.  We keep reading because we want to see what tricks he has up his sleeve and how he’ll accomplish the seemingly impossible.

We also keep reading because Bailey writes really fantastic characters.  Bo is strong and sympathetic and everything we could want in the unsung hero.  But perhaps even more interesting is “The General” – the strong, female prosecuting attorney.  Bailey seems to try to paint her as the ‘bad guy’ in the story, but because he’s made her very real, there still manages to be a humanity to her that we recognize and hope will ultimately come through.

If there’s anything that prevents this from getting a full five stars from me, it’s that the ending is not really a surprise but comes out of nowhere and is told through a rather cheesy confession from someone about to commit a murder.  Still … I want to read everything Robert Bailey writes.

Looking for a good book?  Between Black and White is a fast-paced legal thriller by Robert Bailey that you will not want to put down until the very last page.

Between Black and White