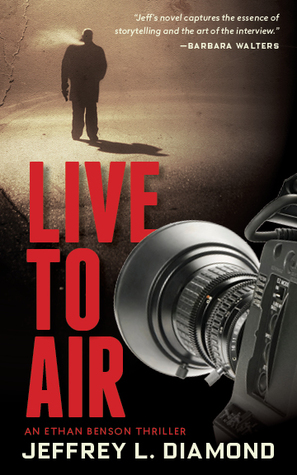 Former television writer/producer Jeffrey L. Diamond has taken his experience working in television and brought it to the page in this mystery/thriller, Live to Air.

Ethan Benson is a television producer working for a magazine-format show in New York.  Ethan doesn’t like doing crime stories, but sometimes, even as a producer, you have to answer to someone else, and in this case, the network executives want him to look into a gang-war shoot-out in the meat-packing district that resulted in the death of the Deputy Mayor’s daughter.

Benson uncovers a web of corruption that reaches from an organized Russian mob to the halls of Justice.  And an exposé on the Russian mob brings danger not just to Benson and his crew, but to their families as well.

Author Diamond has done a tremendous job of building a multi-layered tale that his protagonist weaves through to get to the truth behind the story he is chasing.  It is nice that the reader makes the discoveries at the same time as Benson, keeping the reader turning pages to see what comes next.

The ending seemed a little obvious a little too early for me, and given that we tend to see the information at the same time as the protagonist, it was a little surprising that he didn’t see it coming early.  The story also relied on ‘that one piece of information’ that we weren’t privy to until the reveal (which, of course, was live, on the air).  And the downfall and confession (again, on the air) of the culprit was very convenient and felt as though it were easily obtained.

Overall, a nice story – it’s nice to have a thriller that doesn’t involve police or former-police – but with an ending that wrapped up too quickly and conveniently.

Looking for a good book?  Live to Air by Jeffrey L. Diamond is a nice thriller debut that will have you anxious to read what’s next, but finishes too smoothly.

I received an ARC copy of this book from the publisher in exchange for an honest review.