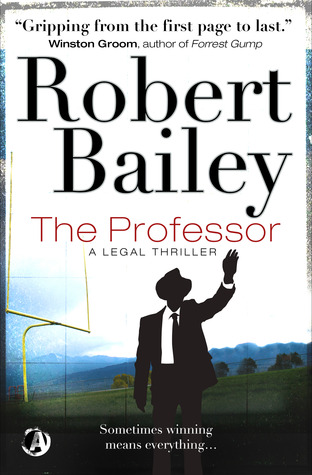 If the film rights are still available to this legal thriller then let the bidding wars begin — this is bound to be a sure-fire hit!

WARNING:  POTENTIAL SPOILERS AHEAD — READ AT YOUR OWN RISK!

“The Professor,” Thomas Jackson McMurtrie, teaches law and literally wrote the book on evidence in Alabama: McMurtrie’s Evidence.  McMurtrie also once played football for legendary coach ‘Bear’ Bryant.  All this a way of setting up the fact that McMurtrie is a force to be reckoned with.

Due to some circumstantial evidence, and a personal willingness to give up, McMurtrie is forced to resign his tenured position at his law school.  He refers a legal case to a former student (the very former student who initially gets McMurtrie in trouble due to an ill-timed video), Rick Drake.  As the case looks to be caving in on Drake (who is facing one of the toughest defense attorney’s in Alabama (and happens to be the same attorney who forced McMurtrie to retire)), the young Rick Drake asks for McMurtrie’s help.  McMurtrie would rather curl up and let life pass him by.

Author Robert Bailey moves the action along at a rapid clip, and the reader feels s/he is in on every important decision.  Bailey manages to make the highs feel SO good and exciting and the lows make the reader’s heart beat with anxiety and concern.  I haven’t been this involved in a book in a long time.  I almost cheered and shed happy tears during the feel-good moments.

Yet as easy to read and happy feeling as this book gets, there are a couple of downsides.  While the highs are high and the lows are low, this comes partly because the characters are stereo-typed caricatures.  The villains are so completely and utterly villainous that they might be wearing black hats and twirling handle-bar moustaches.  And on the other side, could McMurtrie have been set up any stronger as a man of heroic proportions?  He played football (the all-american, tough sport) for a legend; he truly wrote the book that judges have on their bench in courtrooms; he’s respectful and charitable.  Picture white hat and gleaming white teeth.

And when the book reaches a fevered pitch, with almost everything going wrong, McMurtire rides his white horse in to the rescue (figuratively).  And we the reader know it’s going to happen.  Nothing here possibly comes as a surprise.  Page by page we know what will come next.  It’s to Bailey’s credit that he keeps us reading despite the obvious outcomes.

I took some issue with Drake’s failure.  He’s recommended by McMurtire, and while he’s clearly set up as not-quite-ready, he couldn’t be more incompetent in the courtroom.  Of course this makes McMurtrie’s sudden appearance all the more dazzling, because of how dire the situation appears.

And here Bailey throws us his one slight-of-hand trick…the only time we aren’t in on the action is when McMurtrie comes to save the day – not with his legal expertise, but because he had the fore-sight to have some key people tailed and has damning evidence to use on them in the courtroom.  This little bit of trickery detracts from the otherwise well-plotted novel.

The other slight negative from this book is the budding romance that Bailey tries to work in.  This was not well handled.  The romance seems to come from both parties, without build-up, without the usual testing of the waters (oh…Bailey tries, but it’s so whisper thin, that it doesn’t even look like he’s tried).  But what’s more… it’s totally unnecessary.  It adds nothing to the plot and nothing, really, to the characters.  Bailey needs to stick with what he knows… legaleze and swift, thrilling law action.  I see that this is a first book in a series, and it would have served the book, and the characters, much better to let this romance blosom in future tales, rather than slowing the pace unnecessarily.

Still…all in all… this has ‘best-seller’ written all over it.  It’s active, it’s compelling, it’s an easy read.  If I were to look for something new, and thrilling, this is exactly what I’d want.  Yes, I’m likely to read the next book in the series.

Looking for a good book?  This will give you a thrill, make you stand up and cheer, and feel good all over.

3 comments on “THE PROFESSOR – Robert Bailey”