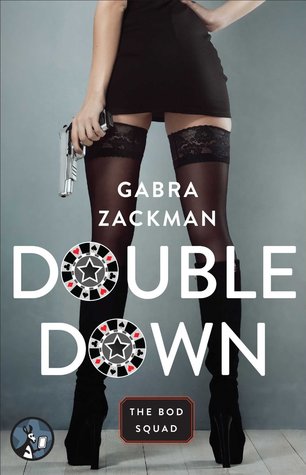 Tyka and Mahmoud are two trained assassins who have zeroed in on one another, discovering that their quick hook-ups really are an indication of their interest in each other is much more serious than either intended.  But before they can get down to serious personal business, they must deal with the little matter of Baba Samka, their arch nemesis.  No one really knows who Baba Samka really is, but the Bod Squad is determined to find him and stop him.

This is a fast-paced tale that you can’t take too seriously but is entertaining with just enough mystery to keep the reader engaged in the action.

On the one hand, the Bod Squad doesn’t quite seem capable of arresting a jay-walker, much less taking out a criminal mastermind.  Even their own leaders don’t seem to have the greatest confidence in them (when they call with Samka’s location they aren’t believed).  But just when you start thinking that the Bod Squad are becoming a bit Inspector Clouseau-like, they show off some of their skills and show why they are an elite team of undercover agents.

This is book three in a series.  I haven’t read the other two, and while this does seem to stand alone as a complete story, I did feel I was missing out on some of the relationship background that might have made things just a bit clearer.  I would definitely like to go back and catch up on the previous two books in the series.

The mystery itself was well developed, despite the fact that Baba Samka and the members of the Bod Squad were a bit cartoonish, but Baba was definitely someone to fear.

This isn’t a deep book.  This is quick, light-hearted entertainment with a little mystery and a little romance.  It’s train-commute material, or an afternoon at the beach material.  It does a nice job of delivering some pleasurable reading.

Looking for a good book?  Book three in The Bod Squad series, Double Down, by Gabra Zackman is a fast, light-hearted thriller/romance that would make a great rainy afternoon read.