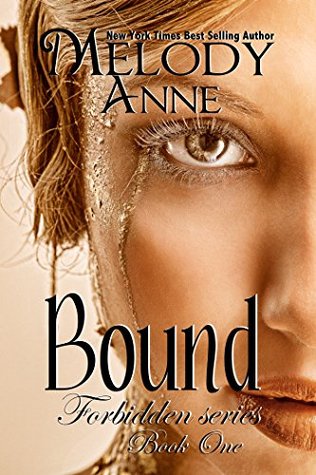 **WARNING — THIS REVIEW WILL FEATURE SPOILERS**

I’ve read books in nearly every genre except ‘romance’ — until now.  I decided that I should expand my horizons and read a modern romance, so as I perused the books in Netgalley that are available to request, I selected the first romance that popped up.  Bound, by Melody Anne.  According to the blurb, Melody Anne is a New York Times Best Selling author.  This should be good, right?  Well, one would hope so…

Where do I begin?  I’ll start with the story.  A woman (Jewell Weston) desperately needs a job.  It’s the only way she can save her little brother since their parents death.  Without a steady income, she can’t prove that she can provide for the boy and until she can provide, he’s in a foster home.  Just in case you don’t understand this, we’re told this more than once.  Every time the woman doubts herself, or gets frustrated with her new career choice, she reminds herself that she’s doing this for her little brother.  To really hit this point home, near the end of the book, the boy tells his sister that he’s been locked in his room and starved.  This is important for her to keep her job!  Don’t forget that now!

So what does Jewell do?  What job can she possibly get that will provide her with enough, steady income so that she can prove to the courts that she’s a responsible caregiver to her little brother?  Why, she’ll be an escort, of course!  It’s a last resort, of course, but Jewell is desperate.  So when a woman hands her a business card and says she can offer her work, Jewell looks her up to discover the woman runs Relinquish Control, an escort agency of a slightly different nature, catering to clients who like to dominate their escorts.  Jewell isn’t sure about this, but she’s desperate, so she goes ahead with this.

Relinquish Control needs time to train Jewell, so she’s not really available right away, but when mega-millionaire Blake Knight wanders in, looking for a woman to control for a week, his eyes lock on Jewell and he knows she’s something special.  He’s rich, so he can by-pass the rules of the company and even though they don’t think she’s ready, he selects her and she goes.

Although Blake fights against his own desires, he’s drawn to her.  And although Jewell doesn’t want to get emotionally involved, she’s attracted to him.  And even though Blake is a cad and often cruel, Jewell finds little ways to justify her attraction to him:

Holy hell!  That chest of his was something dreams were made of.  He was far too perfect looking to be the emotional mess that he obviously was.  No mere mortal should possess such looks, such poise, such money.  He had it all, and it wasn’t fair to the people he trampled under his feet.
…
She had to admit that Blake had an incredible work ethic.  It wasn’t just for clients with megabucks…
…
If she were with him much longer, she’d be helpless to resist needing his attention.

But let’s not forget that she’s a hired escort and he’s looking to dominate, to control a woman.  Right from the start he takes control and forces her to strip in the public parking garage, and he fondles and caresses her, getting them both excited.  And when he’s at work and she’s alone in his condo, she’s being watched by him from many video cameras placed all over the home.  He calls her and texts her and has her perform sexual acts so that he can watch.

And there’s sex.  Sex described with terms like “throbbing member” and “thick, hot shaft” and “his arousal pressing against her heat.”  But there’s a little surprise in store.  Jewell is a virgin until Blake takes her for the first time.  Yes, the virgin took a job as a sex worker at a specialty escort service.  But it’s okay…remember, she’s desperate.

So that’s the story.  It’s not earth-shattering, but there is a story-line and there is a goal and there are obstacles to achieving that goal.  These are things I like to see in a book. Let me talking about the writing itself for a moment.

This is not the sort of writing that I would expect to see from a New York Times bestselling author.  There’s a lot of ‘telling’ rather than showing.  Author Melody Anne wants to keep the story moving, so rather than letting the reader see what the characters are thinking and feeling, we’re just told flat out (“But the way Blake treated her also showed his character, and it wasn’t something that anyone should brag about.” “…after all, you will have to use me as a reference and I can ruin your chances.”).  And there’s the incorrect pronoun use (aren’t there editors for books anymore?): “… has always been good to my brothers and I.”

And then there’s the sex.  There’s plenty of sex in this book, which really surprised me.  This read much more like a Penthouse Letters/Forum story than a romance novel.  I really expected something just a bit more different.  Perhaps more subtle and not so overt with the sexual language?  Not being previously familiar with the romance genre, I guess I only had my own expectations (maybe something a little more on the lines of Austin or Brontë as opposed to Henry Miller or Anaïs Nin) in mind and this was not it.

Overall, I didn’t mind the story, though it was very simple and we just kept reliving the same moments to reinforce with the reader that 1) She was really desperate to resort to this, but it’s all for her little brother, and 2) they really like each other but don’t want to admit it.  The writing was so simple that a middle schooler could read this (though I hope they wouldn’t since it’s riddled with sex). And I was surprised at the amount of descriptive sex within.  It’s really no different from what society would label as ‘porn’ if a man were to buy it. But the part I disliked the most…there is no ending.  This is the first book in a series and it’s very VERY obvious as the book ends right in the middle of the most dramatic moment that we’ve read to this point.  This action alone … a cheap attempt to make the reader buy the next book … gets a couple of thumbs down from me.

Overall, I think that what I learned is that if this is the quality of writing that earns a romance writer a spot on the New York Times best seller list, then readers aren’t particularly discerning.

Looking for a good book?  Bound, by Melody Anne, is pornography billed as a ‘romance’ so if you like reading descriptive sex within a story, you might enjoy this unfinished book (be prepared to shell out more dough to read the conclusion of the story).