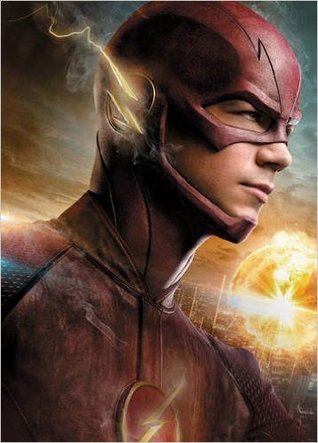 I’m going to take a wild guess here that this particular graphic novel, and probably more likely the individual comics that make up this graphic novel, is targeted solely at the younger fan of The Flash television series.  Those fans who’ve never purchased a comic book before.  And publisher DC is trying to capitalize on this by putting out some titles that use the television show as the basis for the stories.  Even though the television series is based on a comic book character, it has established its own world and characters unique to the series (or at least their personalities, as envisioned by the actors and directors is probably quite unique).  And so DC wants to leapfrog off of this.

Don’t get me wrong…I actually think it’s quite a good idea to get new readers by drawing them in to the comic book/graphic novel format because of their interest in a television show.  But you have to do it well!  And this doesn’t do it well.  Instead, this perpetuates the idea that comics are cheesy and cartoony.  That you can’t take them seriously because their stories are so simple.  And if this were your only introduction to comics, you would continue to believe that.

Each story pretends to be an episode of The Flash television series with a very simple arc and really basic goals and obstacles.  One story has Flash fighting a giant spider. Another story has Barry Allen/Flash tired of constantly on the go and saving people; he can’t not try to save everyone, but it’s draining.  The book ends with him happy that a young boy saves a man from a burning building because he (the boy) thought “What would The Flash do?” (And I thought…”Really? The Flash is glad a young boy risked dying to save someone?”)  Even the series episodes have more in-depth storytelling than this collection!

And the art is mostly pretty terrible.  Sometimes you can tell who the characters are just by looking at them, and sometimes you can’t.  It looks like a rush job from start to finish, with the look here being some of the worst I’ve seen in a DC publication.

I’m very disappointed with this book and I expect it will turn off a good many youngsters instead of drawing them in.

Looking for a good book?  Trying to capitalize on the hit series The Flash, this comic/graphic novel spin-off takes story-lines that never would make it on the show, and is paired with art that is generally very weak.

artists: Phil Hester and Marcus To