BEYOND A DOUBT – Nancy Cole Silverman 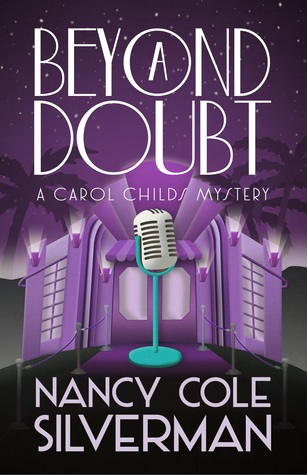 I reviewed the first book in this mystery series about a year ago (you can read that review here) and found it to be fine but not outstanding.  I am glad to report that this second book, Beyond a Doubt, by Nancy Cole Silverman, steps it up a notch and delivers an exciting mystery.  More ‘bite’ – just as I asked for at the end of my previous review.

Carol Childs is a reporter for a local (Hollywood) radio station.  She is on the scene where the body of a previously missing girl is being pulled from the Hollywood Hills.  There have been a rash of reports of girls (young women in their early-to-mid twenties) gone missing.  One of the latest is the daughter of a prominent judge.

Looking to not only report a story, but to report the conclusion to a story, Childs begins her own investigation.  She discovers that it isn’t just the pretty, white, college co-eds who have gone missing, but some of the young, African-American women from the poor end of the city have also gone missing, but no one reports this on local news media.  Carol is made aware of this by a uniformed police officer she communicates with, who tells her that until the media starts paying attention to the people who aren’t part of the rich and famous and ‘in’ crowd, he isn’t too keen on working with the media.

As Carol starts putting the puzzle pieces together, getting her own daughter dangerously involved, she realizes that all signs point to a human trafficking ring and that behind it all is one very powerful, very dangerous man.  A philanthropist and friend to many high-level figures in Los Angeles (including the chief of police) Carol’s suspect has shown that he can get at Carol at any time.  While she fears for her own life, and is in fact placed in mortal danger, she knows that only through her persistent attempts to get some proof can she save many young women.

Author Nancy Cole Silverman has written a really gripping mystery – a thriller, really – that you don’t want to put down.  There were moments still when I felt that the story jumped a bit too quickly and we were told some things, rather than experiencing them or discovering them as we moved along.  I’ve also gone back to think more about the incident when Carol involves her daughter and it ends poorly.  I did expect that this would play a much bigger part in the story later on, and while it was mentioned, it did not nearly have the impact I thought it should.  I don’t think this was a ‘red herring’ but just a sign of crafting a story that wasn’t as sharp as it could be.  Still, this is really a nice step up from the previous book and it bodes well for future Carol Childs Mysteries.  Beyond a doubt…I’m impressed.

Looking for a good book?  Nancy Cole Silverman’s mystery, Beyond a Doubt, is a thrilling mystery that will keep the reader glued to the story right up to the very last page.

I received a digital copy of the book from the publisher, through Netgalley, in exchange for an honest review.