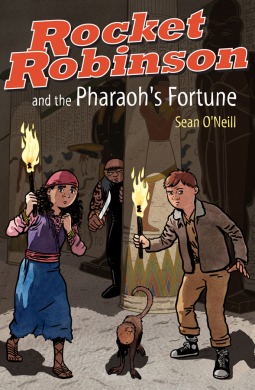 This is a delightful comic (graphic) novel for younger readers.  What ten year old boy doesn’t like the idea of: 1) cracking a code that adults can’t crack; 2) discovering a heretofore forgotten Egyptian tomb, complete with treasure; 3) having a pet monkey; 4) hanging out with a girl who seems pretty ‘cool?’

I still remember when I ‘discovered’ ancient Egypt in school and learned about the treasures hidden in the pyramids.  And of course I had the childhood fantasies of making my own discoveries.  This book brought back those memories, and I wondered if it might not play on those same youthful fantasies for a new generation.

The story itself has enough holes in it that it won’t stand up to being read by young adults (or older).    (WARNING *** POSSIBLE SPOILER ALERT **)  A simple code that the young Rocket Robinson can break relatively simply?  Secret doors and passageways that no one else has found before?  Explosions under the Sphinx that do no damage above?  Yet there is a story, a plot, here, that is just right for the younger readers to catch on to and stay interested in.

The characters are stock characters.  From the in-attentive parent, to the curious young hero, to the bad guys who look like bad guys, everyone is pretty much what you expect them to be on your first meeting them.  Once again… this is fine for younger readers who haven’t yet been introduced to these characters in books and movies the way the older readers have.

The art seems jarring at first, in its simplicity.  When compared to the superhero comics and dark, depressing graphic novels, of the sort I have reviewed recently, this seems almost unprofessional, but once I got in to the story and moved along, the art didn’t bother me at all.  Again…it’s very appropriate for its intended audience.  But it does lead to my question…why as a graphic novel at all?  Why not a simple reader action book?  Let the reader picture Rocket him/herself?  Why give not only the story but the visuals, too?  In the superhero comics and adult graphic novels, the art is an essential part of the story — it helps create tone, atmosphere, intensity, etc.  In this book, the art just seems … unnecessarily extra.

I no longer have children of appropriate age for this, but I can imagine, had it been available ten years ago, checking it out from the library and letting my children thumb through this.  There’s too much art (being a graphic novel) for it to be a book that I would read aloud to my children, but it might be something that they would pick up glance through on their own.

Looking for a good book?  This is a nice comic book/novel for early readers.

Rocket Robinson and the Pharaoh’s Fortune