CATWOMAN, VOL. 3: DEATH OF THE FAMILY 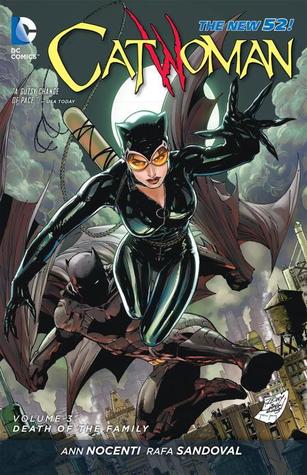 Finally…the end of the “Death of the Family” crossover series (for me, at least — I don’t kow if there are more books in the series out there or not).  And oddly enough, i actually read this book twice.  When I was sorting through my reviews, I saw that this wasn’t posted, so I read the book, only to have that deja vu sense.  Sure enough, I had already read it, but didn’t remember it.  Yes…that says a lot about this book.

But first let me say that I haven’t really enjoyed Catwoman since the slinky, sexy ladies of the 60’s tv show (though Anne Hathaway was enjoyable in the recent movie).  I’m typically not fond of praising villians and villainy.  This book tries to toss in a few tidbits to show the ‘good’ side of Selina Kyle (aka Catwoman), but at heart, she is a thief, never seeming to regret what she does.

This particular book starts off with the promise of a good, strong story with the wickedest of wicked manifestations of Joker I’ve ever seen in the comics.  Here, Joker fights, threatens, and cajoles Catwoman, and we understand that this is because the two of them are competing for Batman’s attentions.  I found this exciting and tempting, and couldn’t wait to see how it tied in with the rest of the “death of the Family” series, and then… and then… I don’t know what happened!  Suddenly the theft of a Black Diamond is all we focus on.  And I use the term ‘focus’ very loosely.

I’ve complained about the repeating of the 33 pages of comic in the other books…33 pages that are identical in every way — all part of that crossover, get it? — and I was partly relieved that it wasn’t in this book (I’d wondered how they would do it, since Catwoman wasn’t at the ‘banquet’ in which the 33 pages cover); but mostly I think it served to show how this book wasn’t really a part of the series.  It was simply one more opportunity to capitalize on the story-line.  At one point, while Catwoman was losing a battle, she cries out “Where are you Batman? You always seem to know when I’m in trouble” and I thought to myself…’ah, there’s the crossover part…he can’t come to her rescue because he’s busy in his own story at the moment…how cheesy!’

This story just meanders, and even having read it twice now, I’m no wiser to why I should have read this.  I’m not touched, moved, motivated, enlightned, entertained,or in any way a better person for having read this.

Being a graphic novel, the art is key to the story and I didn’t particularly care for this art.  Technically it seemed to be fine, but I was distracted by the distortioned poses of Catwoman.  I understand the desire to make her lithe, supple, somewhat feline-like, but it took me out of what little story there was, wondering just how the heck a body would look like that.  And the whip…what the heck is up with that whip?  Is it half a mile long?  It’s curled and coiled and looping all over the place in too many panels.  I undestand the effect the artist is making, but again…it was just distracting.

This series had some real highs (Batman) and some real lows (Catwoman).  Fortunately the stories are not dependent upon one another.

Looking for a good book?  Pick a different book in the DC “Death of the Family” series…this one just isn’t right.

Catwoman, Vol. 3: Death of the Family