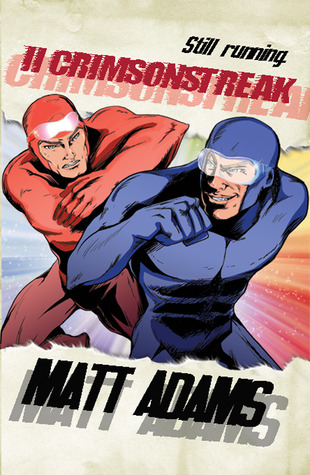 I was very excited to dig in to this book.  A quick look through the blog here and you will see a lot of superhero type books.  I enjoy the genre.  And superheroes who aren’t part of an existing comic book universe is intriguing to me.  But I have to admit that I thought a superhero novel about a character with super speed would move along a little quicker than this did.

First…there doesn’t seem to be much originality in the characters (are we tapped out — is it impossible to create a new super power?).  Super speed, wearing red…hmmm, like the Flash.  With a crime-fighting associate from another planet, complete with wings…hmmm, like Hawkman? Okay…I can actually get around this bit of comic/literary thievery.  It’s a matter of convenience.  But then our main character makes continued references to come of these other comic book superheroes.  Author Adams refers to Green Lanterns so many times, I got annoyed with it.  And the Orange Bands , who are some sort of Guardians of the Galaxy (as what…villians?  heroes?), along with the Indigo Bands and Blue Bands and Yellow Bands, are a cheap knock-off of those same Green Lanterns.

This is a sequel, or follow-up book to I, Crimsonstreak, which I have not read.  While there are clear references back to the first book, I did not get the sense that I had missed out on anything too crucial that wasn’t explained in this book.  The basic plot seems to be a cleaning up of the mess/affects from the first book, only to face an alien invasion, another speedster who runs faster than Crimsonstreak,  and a paradoxical conundrum of colliding multi-universes.  Yeah…seems a bit much, doesn’t it?

It wasn’t until I was about 50% of the way through my electronic Advanced Reader Copy, that I felt the actual plot started.  Half way through before I came to a recognizable plot?!  I understand the need to establish characters and set everything up, but this took way too long, with too many stabs at comic superhero humor (this came off as author Matt Adams trying to show his cleverness rather than a natural conversational tone of the character(s)).

Once I got to the 50% mark and recognized the plotline, I actually started to really enjoy the book, but it had been a struggle to stay with it and get to that point.

I enjoyed the latter part of this book, but not so much that I want to go back and read the first book, or Matt Adams’ other published.

Looking for a good book?  Portions of this are good, but you’ll have to work hard to get there.