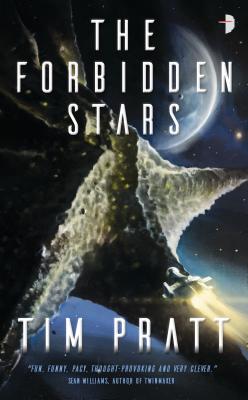 Humanity was given access to a greater section of the universe when an alien race gave us access to 29 wormholes, bringing humans to twenty-nine new star systems.  What the alien race never mentioned was that another race of beings, now known as the Axiom, controlled every other system in the galaxy. The Axiom are an aggressive, dominating race, but fortunately they’ve been asleep since humans gone out to the new systems.

When communication from the 29th wormhole/system has gone silent most assume it the result of internal strife. But Captain Callie and her crew of White Raven have heard that there might be something else happening at 29 – something that would be much more devastating to humanity – and so they pay a visit  and discover humans who have been grafted with all manner of additional and strange limbs and other parts. The Axiom, it seems, are awake and running a human harvesting facility and making plans to attack full force.

This is the third book in author Tim Pratt’s The Axiom series, and just as with the first two, I found this to be some really fun space opera. In my review of the previous book I mentioned that the stakes were about as high as they could get and having high stakes was a key ingredient in space opera.  Now, of course, I see that the stakes could get higher … and do.

There are some twists and turns along the way in this book. Just as we think we know someone and how they will react, they tend to surprise us. Some people will step up and make some life or death choices.

One of the things that stood out to me here is the action level. Pratt ramps up the actions and we have some all-out slug fests that are really page-turning. High on threat level, high on action, with characters who are flawed heroes – just what we need in some really exciting sci-fi.

Looking for a good book? Tim Pratt’s The Forbidden Stars is the third in his Axiom series. This one is a fast-paced thriller with mad-scientist-like aliens bent on taking over the universe.