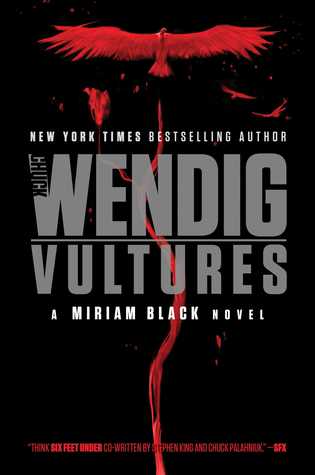 How do you write a review of a Chuck Wendig novel? Answer: write a review as you normally would but periodically, after a description, add “with vengeance.”  For instance: In Vultures, the sixth book in Chuck Wendig’s Miriam Black series, we find Miriam pregnant and that the The Trespasser has the ability to inhabit both the dead and the living. Fate has decreed that the baby will die, but Miriam is ready to defy fate, with vengeance.
If you’ve read any of the other books in the Miriam Black series you’ll want to complete your reading with this series finale. But if you haven’t already familiarized yourself with the series or even with author Chuck Wendig, feel free to jump in here at the end, or better yet, go back and start at the beginning with Blackbirds.
Miriam has a special psychic ability – when she touches someone she can see how and when they die – and she’s become addicted to using this ability. She is also a highly reluctant help for certain law enforcement agencies, currently one such agency is trying to track down a serial killer and Miriam will catch glimpses of the killer when she makes physical contact with some of his future victims. This concept can be pretty depressing and clearly Miriam’s attitude reflects a lifetime of watching people die.
Wendig’s writing is gut-wrenching. Literally.  Take the opening of the book:

This is what it feels like, six months into losing Louis:
It feels like someone has pushed a corkscrew through her middle. It is a comically large tool, this corkscrew, like a cartoon prop, but it feels cold and sharp as it pushes its way through her body every morning, every afternoon, every evening, every hour and minute and second of every f**king day and every f**king night, coiling deeper in her before it reaches her margins and then rips its way back out in one brutal yank, uncorking her insides, spilling her guts, hollowing her out from belly button to backbone.

(Grawlix replacing letters in curse words are mine.)
This is a solid introduction to Wendig and let’s you know right from the start that he’s not going to pull his punches.  He writes with power and with vengeance.
This book is the complete package. You’ve got a murder mystery with a serial killer to stop.  You’ve got a strong hint of supernatural. You’ve got characters who are gritty and flawed, making them come across as powerfully real.  And you’ve got an author whose ability to manipulate the reader with his words is almost beyond compare. He’ll reach into the reader’s psyche, scramble it with vengeance, and remove a few strands of innocence.
I don’t know why Wendig hasn’t been on my ‘must read’ list (that’s changed) but every book of his I’ve read has made an impression on me and I recommend this highly.
Looking for a good book? Vultures, by Chuck Wendig is the 6th book in the Miriam Black series and will leave the reader reeling from the journey.